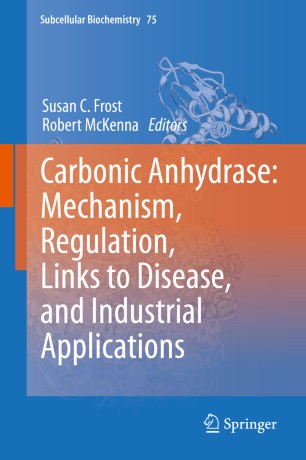 The study of carbonic anhydrase has spanned multiple generations of scientists.  Carbonic anhydrase was first discovered in 1932 by Meldrum and Roughton.  Inhibition by sulfanilamide was shown in 1940 by Mann and Keilin.  Even Hans Krebs contributed to early studies with a paper in 1948 showing the relationship of 25 different sulfonamides to CA inhibition. It was he who pointed out the importance of both the charged and uncharged character of these compounds for physiological experiments.

The field of study that focuses on carbonic anhydrase (CA) has exploded in recent years with the identification of new families and isoforms.  The CAs are metalloenzymes which are comprised of 5 structurally different families: the alpha, beta, gamma, and delta, and epsilon classes.  The alpha class is found primarily in animals with several isoforms  associated with human disease.  The beta CAs are expressed primarily in plants and are the most divergent.  The gamma CAs are the most ancient. These are structurally related to the beta CAs, but have a mechanism more similar to the alpha CAs.   The delta CAs are found in marine algae and diflagellates.  The epsilon class is found in prokaryotes in which it is part of the carboxysome shell perhaps supplying RuBisCO with CO2 for carbon fixation.

With the excitement surrounding the discovery of disease-related CAs, scientists have redoubled their efforts to better understand structure-function relationships, to design high affinity, isotype-specific inhibitors, and to delineate signaling systems that play regulatory roles over expression and activity.  We have designed the book to cover basic information of mechanism, structure, and function of the CA families.  The authors included in this book bring to light the newest data with regard to the role of CA in physiology and pathology, across phylums, and in unique environmental niches.