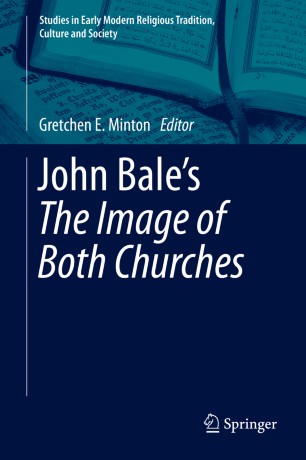 John Bale’s 'The Image of Both Churches'

This book is a critical edition of John Bale's The Image of Both Churches (c. 1545). The Introduction provides a thorough overview of this sixteenth century work, explaining its relationship to the apocalyptic tradition and to Bale's important inspirations, from Augustine to Erasmus and Luther. Topics such as Bale's language, the place of the Image in his oeuvre, his use of medieval chronicles, and the influence of his exegesis are also discussed.

The Image has often been called Bale's most important work; it articulated and developed the English Protestant view of the Apocalypse, influencing other Reformers both in England and on the continent. This book offers the first critical edition of the Image, including fully modernized spelling and punctuation as well as extensive explanatory notes.

The five sixteenth-century printed editions of the Image are collated here, with textual notes that illustrate the relationship between variant readings and provide information on the choices made in this particular edition. This book also reproduces the striking woodcut illustrations from the Image in their original placements; examples from two different woodcut series are offered, as well as an overview of the history and importance of these images in the early printed texts.

Five appendices, including a glossary of unfamiliar terms and a chart outlining Bale's periodization of history, also provide a wealth of information that enables readers to understand and use this edition. The largest appendix, on historical names and terminology, gives biographical information for 450 individuals and explains their importance, both to Bale and to the sixteenth-century Reformers in a broader context.

This critical edition of the Image offers the most thorough study of the work to date, opening up the opportunity for a deeper understanding of this monumental text and for many further avenues of research.

Gretchen E. Minton received her PhD from the University of British Columbia and worked at the University of Minnesota before moving to Bozeman, Montana in 2006. She is Associate Professor of English at Montana State University, where she teaches classes in Shakespeare, early modern British literature, drama, the Bible, and other topics. Dr. Minton is the co-editor of William Shakespeare and Thomas Middleton’s Timon of Athens for Arden Shakespeare (2008). Her other work as an editor includes Troilus and Cressida for the forthcoming Norton Complete Works of Shakespeare and Much Ado about Nothing for the Internet Shakespeare Editions. In addition to her work as an editor, she has published numerous articles, book reviews, and encyclopedia entries on topics including Shakespeare, Erasmus, Augustine, modern drama, and the English Reformation. She is the author of multiple articles and conference papers focusing on John Bale and John Foxe.