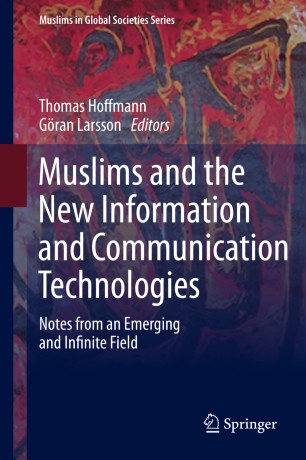 Muslims and the New Information and Communication Technologies

Notes from an Emerging and Infinite Field

This volume deals with the so-called new Information and Communication Technologies (ICT) and their interrelationship with Muslims and the interpretation of Islam. This volume taps into what has been labelled Media Studies 2.0, which has been characterized by an intensified focus on everyday meanings and ‘lay’ users – in contrast to earlier emphases on experts or self-acclaimed experts. This lay adoption of ICT and the subsequent digital ‘literacy’ is not least noticeable among Muslim communities. According to some global estimates, one in ten internet users is a Muslim. This volume offers an ethnography of ICT in Muslim communities. The contributors to this volume also demonstrate a new kind of moderation with regard to more sweeping and avant-gardistic claims, which have characterized the study of ICT previously. This moderation has been combined with a keen attention to the empirical material but also deliberations on new quantitative and qualitative approaches to ICT, Muslims and Islam, for instance the digital challenges and changes wrought on the Qur’an, Islam’s sacred scripture. As such this volume will also be relevant for people interested in the study of ICT and the blooming field of digital humanities. Scholars of Islam and the Islamic world have always be engaged and entangled in their object of study. The developments within ICT have also affected how scholars take part in and influence public Islamic and academic discussions. This complicated issue provides basis for a number of meta-reflexive studies in this volume. It will be essential for students and scholars within Islamic studies but will also be of interest for anthropologists, sociologists and others with a humanistic interest in ICT, religion and Islam.

Göran Larsson is a professor of religious studies at the Department of Literature, History of Ideas and Religion at the University of Gothenburg, Sweden. While his research is primarily focused on Islam and Muslims in Europe, he has also written about Islamic theology, Qur’anic studies and issues related to religion and the media. Apart from his academic work, Larsson also has functioned as secretary to the Ministry of Education's 2008-2009 inquiry into the training of Imams in Sweden. His most recent publication is Muslims and the New Medias: Contemporary and Historical Debates. He has also published Islam and Muslims in Sweden: Integration or Fragmentation? A Contextual Study (2007), in collaboration with professor Åke Sander and edited the volume, Islam in the Nordic and Baltic Countries (2009). Although Larsson earned his PhD in religious studies from the University of Gothenburg, he has also held positions at Uppsala University and Södertörn University College, and has been a guest researcher at the University of Leiden in the Netherlands. Currently, he is also holding a part-time position at Oslo University as lecturer in Islamology and History of Religions. Link: http://www.lincs.gu.se/members/goran_larsson/ Thomas Hoffmann is a professor mso (i.e. with special responsibilities) of Qur’anic studies at the Department of the Section for Biblical Exegesis at University of Copenhagen, Denmark. Hoffmann holds a MA in comparative religion from the University of Copenhagen and received his PhD in 2005. He has worked as an associate professor at Arabic- and Islamic Studies, Aarhus University, Denmark. He has been awarded The Danish Independent Research Council’s Young Researcher’s Award. Among his publications are the monograph The Poetic Qur’an: Studies on Qur’anic Poeticity (2007) and a Danish lexicon on Islam (2008).