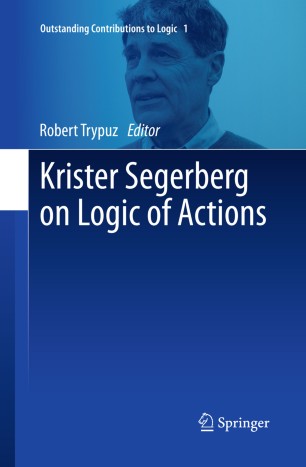 Krister Segerberg on Logic of Actions

This volume describes and analyzes in a systematic way the great contributions of the philosopher Krister Segerberg to the study of real and doxastic actions.  Following an introduction which functions as a roadmap to Segerberg's works on actions, the first part of the book covers relations between actions, intentions and routines, dynamic logic as a theory of action, agency, and deontic logics built upon the logics of actions. The second section explores belief revision and update, iterated and irrevocable beliefs change, dynamic doxastic logic and hypertheories.

Segerberg has worked for more than thirty years to analyze the intricacies of real and doxastic actions using formal tools - mostly modal (dynamic) logic and its semantics. He has had such a significant impact on modal logic that "It is hard to roam for long in modal logic without finding Krister Segerberg's traces," as Johan van Benthem notes in his chapter of this book.

“This book is on the contributions of Krister Segerberg. … A graduate student in the area of logic or in artificial intelligence will find a wealth of material here.” (K. Lodaya, Computing Reviews, June, 2014)