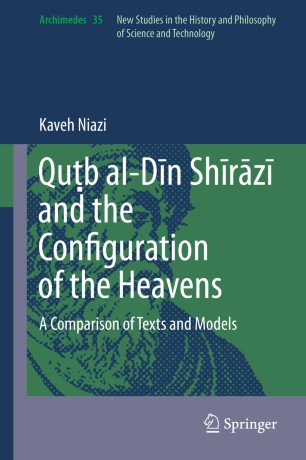 A Comparison of Texts and Models

As a leading scientist of the 13th century C. E. Quṭb al-Dīn Shīrāzī wrote three substantial works on hay’a (or the configuration of the celestial orbs):  Nihāyat al-idrāk fī dirāyat al-aflāk (“The Limits of Attainment in the Understanding of the Heavens”), al-Tuḥfa al-shāhīya fī ‘ilm al-hay’a (“The Royal Offering Regarding the Knowledge of the Configuration of the Heavens”), and Ikhtīyārāt-i Muẓaffarī (“The Muẓaffarī Elections”).  Completed in less than four years and written in two of the classical languages of the Islamic world, Arabic and Persian, these works provide a fascinating window to the astronomical research carried out in Ilkhanid Persia. Shīrāzī and his colleagues were driven by their desire to rid Ptolemaic astronomy from its perceived shortcomings.  An intriguing trail of revisions and emendations in Shīrāzī’s hay’a texts serves to highlight both those features of Shīrāzī's astronomy that were inherited from his predecessors, as well as his original contributions to this branch of astronomical research. As a renowned savant, Shīrāzī spent a large portion of his career near centers of political power in Persia and Anatolia.  A study of his scientific output and career as a scholar is an opportunity, therefore, for an examination of the patronage of science and of scientific works within the Ilkhanid realms. Not only was this patronage important to the work of scholars such as Shīrāzī but it was critical to the founding and operation of one of the foremost scientific institutions of the medieval Islamic world, the Marāgha observatory. The astronomical tradition in which Shīrāzī carried out his research has many links, as well, to the astronomy of Early Modern Europe, as can be seen in the astronomical models of Copernicus.