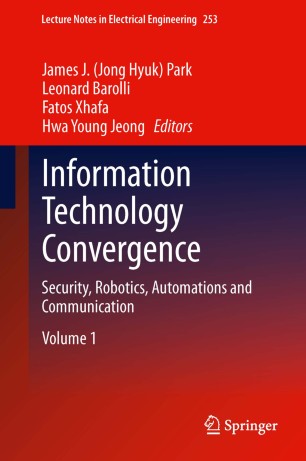 Information technology and its convergence issue is emerging rapidly as an exciting new paradigm with user-centric environment to provide computing and communication services.

This area will be the most comprehensive topics with various aspects of advances in information technology and its convergence services.

This book covers all topics as computational science and applications, electronics engineering, manufacturing technology, services, technical skill to control the robot, automatic operation and application, simulation and testing communication and many more.

James J. (Jong Hyuk) Park received his Ph.D. degree in Graduate School of Information Security from Korea University, Korea. From December, 2002 to July, 2007, Dr. Park had been a research scientist of R&D Institute, Hanwha S&C Co., Ltd., Korea. From September, 2007 to August, 2009, He had been a professor at the Department of Computer Science and Engineering, Kyungnam University, Korea. He is now a professor at the Department of Computer Science and Engineering, Seoul National University of Science and Technology (SeoulTech), Korea. Dr. Park has published about 100 research papers in international journals and conferences. He has been serving as chairs, program committee, or organizing committee chair for many international conferences and workshops. He is a president of the Future Technology Research Association International (FTRA) and Korea Information Technology Convergence Society (KITCS).

Leonard Barolli was born on July 17, 1965 in Trestenik, Bilisht, Albania. He received B.S. from Tirana University, Albania in 1989 and Ph.D. degree from Yamagata University, Japan in 1997. From April 1997 until March 1999, he was working as a Post Doctor Fellow Researcher of Japan Society for the Promotion of Science (JSPS) at Department of Electrical and Information Engineering, Yamagata University. From April 1999 to March 2002, he was working as a Research Associate at Department of Public Policy and Social Studies, Yamagata University. From April 2002 to March 2003, he was an Assistant Professor at Department of Computer Science, Faculty of Engineering, Saitama Institute of Technology (SIT). From April 2003 to March 2005, he was an Associate Professor and presently is a Full Professor at Department of Information and Communication Engineering, Faculty of Information Engineering, Fukuoka Institute of Technology (FIT).
Dr. Barolli was an Editor of Information Processing Society of Japan (IPSJ) Journal and has served also in the Editorial Board for some Special Issues of IPSJ Journal. Dr. Barolli has served as a Guest Editor of many International Journals. He is engaged as a Program Committee (PC) Member in many International Conferences. He was a Program Committee Vice Chair of IEEE ICPADS-2001 and IEEE ICOIN-16 International Conferences. He was a PC Co-Chair of AINA-2003 and PC Chair of IEEE AINA-2004 and IEEE ICPADS-2005. Dr. Barolli served as General Co-Chair of AINA-2006. He is serving as Workshops Chair of iiWAS-2006 and Workshops Co-Chair of IEEE AINA-2007. He is Steering Committee of AINA, iiWAS, MoMM, ARES and CISIS International Conferences. He is organizer of MNSA, NBiS, HWISE, WAIS, BWCCA and 3PGIC International Workshops. He has served as a reviewer for many International Conferences and Journals.
Dr. Barolli has published more than 200 papers in Referred Journals, International Conference Preceedings and National Workshops. His research interests include high-speed networks, mobile communication systems, ad-hoc networking, sensor networks, P2P systems, Quality of Service (QoS), traffic control mechanisms (policing, routing, congestion control, Connection Admission Control (CAC)), intelligent algorithms (fuzzy theory, genetic algorithms, neural networks), network protocols, agent-based systems, grid and Internet computing. Dr. Barolli is a member of IPSJ, Japan Society for Fuzzy Theory and Systems (SOFT), IEEE Society and IEEE.

Fatos Xhafa is native from Albania (Spanish citizen) where he was graduated in Mathematics from the Faculty of Natural Sciencies (FNS), University of Tirana (UT), Albania, in 1988. During 1989-1993 he was an Assistant Professor at the Department of Applied Mathematics of the FNS, UT, Albania.
Fatos joined the Techical University of Catalonia as a Visiting Professor at the Applied Mathematics Department I, and later he entered the Department of Languages and Informatic Systems (LSI) as a PhD student and in 1996 as an Assistant Professor. Fatos got his PhD in Computer Science from the Department of LSI in 1998.
Currently, Fatos is Hab. Full Professor and holds a permanent position of Professor Titular at the Department of LSI and member of the ALBCOM Research Group. His current research interest include parallel and distributed algorithms, combinatorial optimization, approximation and meta-heuristics, networking systems, distributed programming, Grid and P2P computing. His research is supported by Research Projects from Spain, EU and NSF/USA. Fatos is awarded research merits for the period 1996-2007 (dos sexenios) and for the period 2001-2006 (sexeni compl. autonòmic.) and teaching merits for the period 1995-2010 (tres quinquenios). His research/teaching activity is evaluated to A/A by the Universitat Politècnica de Catalunya.
Fatos is involved in the organization of several International events. He served as Organizing Chair of ARES-2008, PC Chair of
CISIS-2008, General Chair of HIS-2008 and of 6th 3PGCIC-2011/6th BWCCA-2011 conferences held at UPC. He served as Workshops Chair of CISIS-2009. Currently, he is General Co-Chair of INCoS-2009/INCoS-2010, PC Co-Chair of AINA-2010, General Co-Chair of CISIS-2010 and AINA-2011 conferences. He is the co-organizer of several workshops held in conjunction with international conferences. Fatos is Editor-In-Chief of International Journal of Space-Based and Situated Computing (IJSSC) and of International Journal of Grid and Utility Computing (IJGUC), member of EB of  several International Journals and Guest Editors of Special Issues. Fatos teaches at UPC and also at Open University of Catalonia (UOC). He is also external member of the research group Parallel, Distributed and Collaborative Systems  (PDCS) of UOC.

Hwa Young Jeong is in the Humanitas College at Kyung Hee University, Seoul, South Korea. He is a reviewer of MTAP (Multimedia Tools and Application) at Springer. And he is a member of the Standard Words Committee in Ministry of Information and Communication Republic of Korea. He has worked on the editorial board of the journal of the Korea Society for Internet Information from 2004. He was a system and software engineer in the Aju System Co., and CNA Research Inc., 1994 ~ 1999. In there, he had worked and programmed the GUI system of semiconductor testing machine which was called IC Test Handler. He was assistant professor, Dept of E-Business of Yewon Art University in 2000~2005.