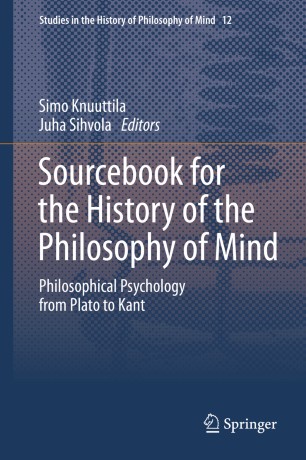 Sourcebook for the History of the Philosophy of Mind

Philosophical Psychology from Plato to Kant

Part of the Studies in the History of Philosophy of Mind book series (SHPM, volume 12)

Fresh translations of key texts, exhaustive coverage from Plato to Kant, and detailed commentary by expert scholars of philosophy add up to make this sourcebook the first and most comprehensive account of the history of the philosophy of mind. Published at a time when the philosophy of mind and philosophical psychology are high-profile domains in current research, the volume will inform our understanding of philosophical questions by shedding light on the origins of core conceptual assumptions often arrived at before the instauration of psychology as a recognized subject in its own right.

The chapters closely follow historical developments in our understanding of the mind, with sections dedicated to ancient, medieval Latin and Arabic, and early modern periods of development. The volume’s structural clarity enables readers to trace the entire progression of philosophical understanding on specific topics related to the mind, such as the nature of perception. Doing so reveals the fascinating contrasts between current and historical approaches. In addition to its all-inclusive source material, the volume provides subtle expert commentary that includes critical introductions to each thematic section as well as detailed engagement with the central texts. A voluminous bibliography includes hundreds of primary and secondary sources. The sheer scale of this new publication sheds light on the progression, and discontinuities, in our study of the philosophy of mind, and represents a major new sourcebook in a field of extreme importance to our understanding of humanity as a whole.​

Juha Sihvola (died 2012) was Professor of General History at the University of Jyväskylä and Director of the Helsinki Collegium for Advanced Studies in 2004–2009. He published widely on ancient philosophy, its later influence and contemporary political issues. He was editor of many books on ancient philosophy.