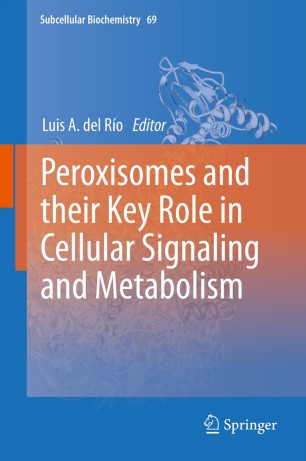 Peroxisomes and their Key Role in Cellular Signaling and Metabolism

Peroxisomes are a class of ubiquitous and dynamic single membrane-bounded cell organelles, devoid of DNA, with an essentially oxidative type of metabolism. Today it is known that fatty acid β-oxidation is a general feature of virtually all types of peroxisomes, but in higher eukaryotes, including humans, peroxisomes catalyze ether phospholipids biosynthesis, fatty acid α-oxidation, and glyoxylate detoxification, and in humans peroxisomes are associated with several important genetic diseases. Among the different new roles for human peroxisomes discovered in recent years are antiviral innate immunity, peptide hormone metabolism, brain aging and Alzheimer’s disease, and age-related diseases. In fungi, new findings have broadened the number of secondary metabolites that are synthesized in peroxisomes, such as antibiotics and several toxins, and have evidenced their involvement in biotin biosynthesis, fungal development and plant pathogenesis. In plants, peroxisomes carry out different functions, apart from fatty acid β-oxidation, mainly including photorespiration, metabolism of reactive oxygen, nitrogen and sulfur species, photomorphogenesis, biosynthesis of phytohormones, senescence, and defense against pathogens and hervibores.

Two important characteristics of peroxisomes are their metabolic plasticity and capacity of sharing metabolic pathways with other cell compartments. In recent years, a function for peroxisomes as key centers of the cellular-signaling apparatus which could influence the regulatory network of the cell has been postulated. The diverse key physiological functions that have been demonstrated for peroxisomes from different origins strongly indicate the interest of studying the role of peroxisomes as a cellular source of different signaling molecules. This book presents recent advances in the function and metabolism of peroxisomes from human, animal, fungal and plant origin and their metabolic interconnection with other cell compartments, showing the central role played by peroxisomes as cell generators of different signaling molecules involved in distinct processes of high physiological importance.