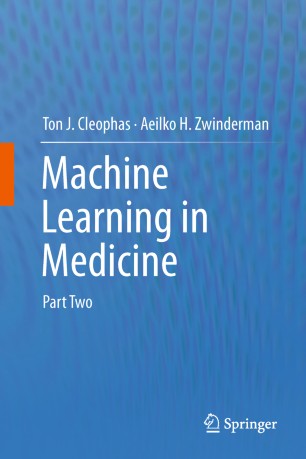 Both the theoretical bases and the step by step analyses are described for the benefit of non-mathematical readers. Each chapter can be studied without the need to consult other chapters. Traditional statistical tests are, sometimes, priors to machine learning methods, and they are also, sometimes, used as contrast tests. To those wishing to obtain more knowledge of them, we recommend to additionally study (1) Statistics Applied to Clinical Studies 5th Edition 2012, (2) SPSS for Starters Part One and Two 2012, and (3) Statistical Analysis of Clinical Data on a Pocket Calculator Part One and Two 2012, written by the same authors, and edited by Springer, New York.

“This is the second volume of a novel publication on machine learning in medicine that details statistical analysis of complex data with many variables. … The intended audience includes physicians, clinical researchers, physicians in training, statisticians, and medical students as well as master’s and doctoral students in biostatistics and epidemiology. … The simple language and well-organized chapters are unsurpassed attributes of this book. It is an exceptional resource for a quick review of machine learning in medicine.” (Goral Panchal, Doody’s Book Reviews, October, 2013)
Buy options