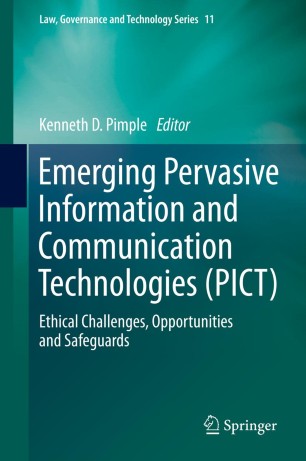 This book provides a wide and deep perspective on the ethical issues raised by pervasive information and communication technology (PICT) – small, powerful, and often inexpensive Internet-connected computing devices and systems. It describes complex and unfamiliar technologies and their implications, including the transformative potential of augmented reality, the power of location-linked information, and the uses of “big data,” and explains potential threats, including privacy invaded, security violated, and independence compromised, often through widespread and lucrative manipulation.

PICT is changing how we live, providing entertainment, useful tools, and life-saving systems. But the very smartphones that connect us to each other and to unlimited knowledge also provide a stream of data to systems that can be used for targeted advertising or police surveillance. Paradoxically, PICT expands our personal horizons while weaving a web that may ensnare whole communities.

Chapters describe particular cases of PICT gone wrong, but also highlight its general utility. Every chapter includes ethical analysis and guidance, both specific and general. Topics are as focused as the Stuxnet worm and as broad as the innumerable ways new technologies are transforming medical care.

Written for a broad audience and suitable for classes in emerging technologies, the book is an example of anticipatory ethics – “ethical analysis aimed at influencing the development of new technologies” (Deborah Johnson 2010).

The growth of PICT is outpacing the development of regulations and laws to protect individuals, organizations, and nations from unintended harm and malicious havoc. This book alerts users to some of the hazards of PICT; encourages designers, developers, and merchants of PICT to take seriously their ethical responsibilities – if only to “do no harm” – before their products go public; and introduces citizens and policy makers to challenges and opportunities that must not be ignored.

“This edited volume presents these and other case studies and analyzes their various aspects. … the book offers a healthy discussion. Both technology developers and users should pay attention to the many issues presented. Summing Up: Recommended. All levels/libraries.” (H. Levkowitz, Choice, Vol. 51 (10), June, 2014)

“Emerging Pervasive Information and Communication Technologies (PICT) is a highly interdisciplinary collection of eleven essays from an NSF-sponsored workshop on ‘Pervasive and Autonomous Information Technology.’ … this collection of essays is accessible and inviting. … The book would be suitable as an advanced undergraduate or graduate text, and is interesting for its variety of approaches as well as the many examples of PICT that are described herein.” (Thomas M. Powers, The Journal of Philosophy, Science & Law, Vol. 14, June, 2014)