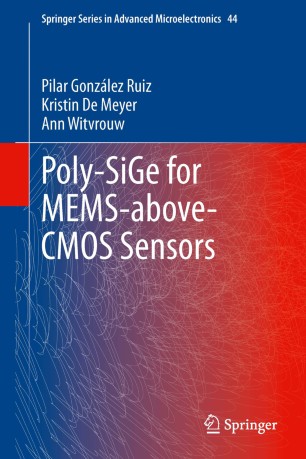 Polycrystalline SiGe has emerged as a promising MEMS (Microelectromechanical Systems) structural material since it provides the desired mechanical properties at lower temperatures compared to poly-Si, allowing the direct post-processing on top of CMOS. This CMOS-MEMS monolithic integration can lead to more compact MEMS with improved performance. The potential of poly-SiGe for MEMS above-aluminum-backend CMOS integration has already been demonstrated. However, aggressive interconnect scaling has led to the replacement of the traditional aluminum metallization by copper (Cu) metallization, due to its lower resistivity and improved reliability.

Pilar González Ruiz received her M.S. degree in Electrical Engineering from the University of Sevilla, Spain, in 2006. She obtained the PhD degree from the Electrical Engineering Department (ESAT) at the University of Leuven, Belgium in 2012. During her PhD  she worked on the integration of MEMS and CMOS using polycrystalline silicon-germanium, with a focus on pressure sensors, at imec, Leuven, Belgium. Since 2012 she has been working on integrated imagers at imec, Leuven, Belgium. She has authored or co-authored more than 10 technical papers for publication in journals and presentations at conferences and holds various patents.

Kristin De Meyer M.Sc. (1974), PhD (1979) KULeuven. She was holder of an IBM World Trade Postdoctoral Fellowship at the IBM T. J. Watson Research Center, Yorktown Heights, NY. Currently she is the Director of Doctoral Research in imec. Since October 1986, she has also been a Part-Time Professor with ESAT-INSYS, KUL. She was the Coordinator for IMEC in several EEC projects.  Dr. De Meyer is an IIEE fellow ,member of the Belgian Federal Council for Science Policy and (co) author of over 500 publications.

Ann Witvrouw received an MS degree in Metallurgical Engineering in 1986 from the Katholieke Universiteit Leuven, Belgium, and both an MS degree in Applied Physics in 1987 and a Ph.D. degree in Applied Physics in 1992 from Harvard University, USA. In 1992 she joined imec, Belgium where she worked on the reliability of metal interconnects until the end of 1998. In 1998 she switched to research in Micro-electromechanical Systems at imec, focusing on advanced MEMS process technologies. From 2000 to 2013 she has been working on MEMS integration at imec, first as team leader, then as a program manager and last as a principal scientist. Currently she is a guest professor at the KULeuven, teaching part of a course on ‘Nanomaterials for nanoelectronics’.