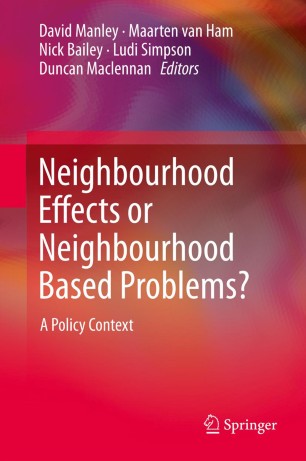 This edited volume critically examines the link between area based policies, neighbourhood based problems, and neighbourhood effects: the idea that living in disadvantaged neighbourhoods has a negative effect on residents’ life chances over and above the effect of their individual characteristics. Over the last few decades, Western governments have persistently pursued area based policies to fight such effects, despite a lack of evidence that they exist, or that these policies make a difference. The first part of this book presents case studies of perceived neighbourhood based problems in the domains of crime; health; educational outcomes; and employment. The second part of the book presents an international overview of the policies that different governments have implemented in response to these neighbourhood based problems, and discusses the theoretical and conceptual processes behind place based policy making. Case studies are drawn from a diverse range of countries including the United Kingdom, The Netherlands, Australia, Canada, and the USA.

“This book sets out to interrogate the link between area-based policies, neighbourhood-based problems and ‘neighbourhood effects’, defined here as ‘the idea that the neighbourhood in which an individual lives can negatively influence their life choices across a vast range of domains’ … . The book is divided into two sections. … I would wholeheartedly recommend this book to policymakers, students and researchers engaged in this important endeavour.” (Rionach Casey, Social Policy & Administration, Vol. 49 (1), January, 2015)
Buy options