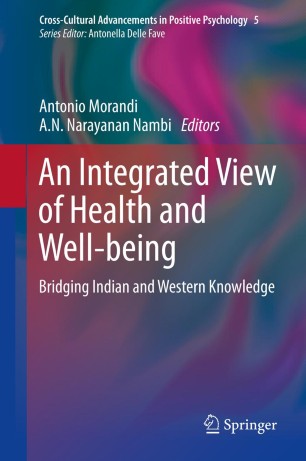 An Integrated View of Health and Well-being

Concepts like Health and Well-being are not exclusive products of the Western culture. Research has widely demonstrated that the representation of the body and of its pathologies, as well as treatment and healing practices vary across cultures in relation to social norms and beliefs.The culture of India is a melting pot of nine main Darshanas, or philosophical systems, that share the common core of a realization of the self in society. India’s traditional health system, Ayurveda, is a result of the practical application of the Darshanas to the observation of human nature and behavior. Ayurveda conceptualizes health, disease and well-being as multidimensional aspects of life, and it seeks to preserve a balance in individuals among their biological features, their psychological features and their environmental demands. The Ayurveda approach to health is remarkably similar to the eudaimonic conceptualization of well-being proposed by positive psychology, and the basic tenets of Ayurveda are deeply consistent with the latest developments of modern physics, which stresses the substantial interconnectedness among natural phenomena and their substrates. This text shows how the approach to health developed in Ayurveda can be fruitfully integrated in a general view of health and well-being that encompasses cultural and ideological boundaries. Specifically, it details the conceptualization of health as an optimal and mindful interaction between individuals and their environment.