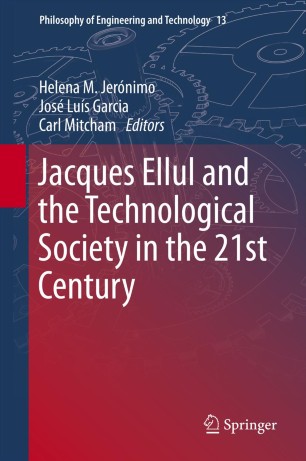 Jacques Ellul and the Technological Society in the 21st Century

Part of the Philosophy of Engineering and Technology book series (POET, volume 13)

This volume rethinks the work of Jacques Ellul (1912-1994) on the centenary of his birth, by presenting an overview of the current debates based on Ellul's insights. As one of the most significant twentieth-century thinkers about technology, Ellul was among the first thinkers to realize the importance of topics such as globalization, terrorism, communication technologies and ecology, and study them from a technological perspective.

The book is divided into three sections. The first discusses Ellul’s diagnosis of modern society, and addresses the reception of his work on the technological society, the notion of efficiency, the process of symbolization/de-symbolization, and ecology. The second analyzes communicational and cultural problems, as well as threats and trends in early twenty-first century societies. Many of the issues Ellul saw as crucial – such as energy, propaganda, applied life sciences and communication – continue to be so. In fact they have grown exponentially, on a global scale, producing new forms of risk.

Essays in the final section examine the duality of reason and revelation. They pursue an understanding of Ellul in terms of the depth of experience and the traditions of human knowledge, which is to say, on the one hand, the experience of the human being as contained in the rationalist, sociological and philosophical traditions. On the other hand there are the transcendent roots of human existence, as well as “revealed knowledge,” in the mystical and religious traditions. The meeting of these two traditions enables us to look at Ellul’s work as a whole, but above all it opens up a space for examining religious life in the technological society.