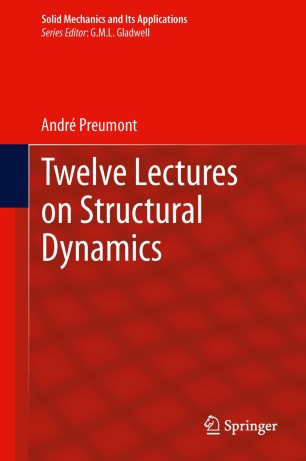 Part of the Solid Mechanics and Its Applications book series (SMIA, volume 198)

This text addresses the modeling of vibrating systems with the perspective of finding the model of minimum complexity which accounts for the physics of the phenomena at play. The first half of the book (Ch.1-6) deals with the dynamics of discrete and continuous mechanical systems; the classical approach emphasizes the use of Lagrange's equations. The second half of the book (Ch.7-12) deals with more advanced topics, rarely encountered in the existing literature: seismic excitation, random vibration (including fatigue), rotor dynamics, vibration isolation and dynamic vibration absorbers; the final chapter is an introduction to active control of vibrations.

The first part of this text may be used as a one semester course for 3rd year students in Mechanical, Aerospace or Civil Engineering. The second part of the text is intended for graduate classes. A set of problems is provided at the end of every chapter.

The author has a 35 years experience in various aspects of Structural dynamics, both in industry (nuclear and aerospace) and in academia; he was one of the pioneers in the field of active structures. He is the author of several books on random vibration, active structures and structural control.

Prof. André Preumont started his career in 1974 as mechanical engineer in an engineering company (Coppee-Rust) working for the steel industry in the Liege area (cold rolling mill). In 1976 he moved to the nuclear industry (Belgonucléaire) where he specialized in structural dynamics, earthquake engineering, and later in random vibrations. He was mainly concerned with the seismic behaviour of nuclear cores (both PWR and Fast Breeder). Prof. Preumont did his Ph.D. from 1978 to 1981 under the supervision of Prof. M. Geradin, while working for Belgonucléaire; the topic was the “Seismic analysis of pressure water reactor cores”; it was mainly concerned with nonlinear structural dynamics with impact, but it was also the starting point of his research work in random vibrations. Prof. Preumont created a course in Random Vibrations at the University of Liege at about that time. His work on the artificial earthquake generation and on the seismic behaviour of nuclear reactor cores was awarded the International Vinçotte Prize in 1983. Gradually, he got more interested in aerospace and, in 1985, Prof. Preumont was offered to go to the USA as Visiting Professor at the Aerospace and Ocean Engineering Department of Virginia Polytechnic Institute and State University. At the time, there was a tremendous interest in large space structures in the USA, mainly because of the “strategic defence initiative” and the space station program. He stayed there for a year and was initiated to the control of large space structures by Profs. R. Haftka and W.Hallauer; the former was a world renowned specialist in structural optimization and the latter was, at the time, one of the few experimentalists trying to implement control systems that worked on actual structures. When Prof. Preumont returned to Belgium he resumed his job for Belgonucléaire and looked for an academic position. In 1987, he was appointed at the chair of Mechanical Engineering and Robotics of the University of Brussels (ULB). From then on, he shared his time between teaching and research in Structural Dynamics, Control, Robotics, and Mechanical Engineering. Since his appointment at ULB, his research activities have been divided into three themes :(i) Random vibrations, (ii) Active structures and (iii) Robotics and Mechatronics.