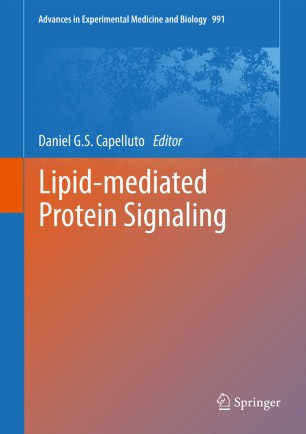 Part of the Advances in Experimental Medicine and Biology book series (AEMB, volume 991)

Lipids are no longer seen as molecules that only provide membrane structure and organization.  Due to their amphipathic nature, lipids are localized both on the surface and internally in membranes in the cell, and at these locations, trigger signaling pathways by interacting with soluble proteins, typically through lipid-interacting domains and motifs. More importantly, interconversion of lipid species in these compartments is fundamental, not only by sustaining signaling but also by contributing to signaling pathways that link protein receptors with intracellular effectors. With contributions from eleven leading research teams, this book updates the most recent findings associated with lipid-mediated cell signaling in mammals and plants. Contributors give comprehensive overviews of the physiological role of sphingolipids and phospholipids and how they undergo synthesis and turnover. Emphasis on the structural aspects of protein-lipid interactions is compiled in several chapters with great detail, whereas fully described mechanisms of lipid-mediated membrane targeting and insertion are considered in others. Authors also discuss models and techniques used to characterize lipid-mediated membrane binding of proteins. In addition, several chapters highlight the correlation of abnormal intracellular levels of lipids with human diseases, thus, making this book a valuable resource for biochemists, biophysicists, cell biologists, and clinical scientists with interest in lipid-mediated signaling pathways.