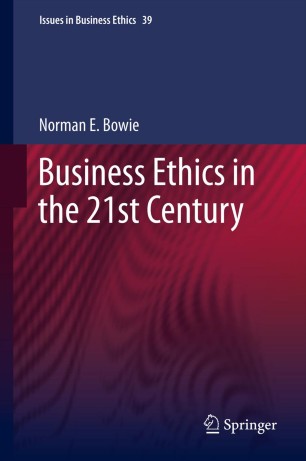 Business Ethics in the 21st Century

This work provides a critical look at business practice in the early 21st century and suggests changes that are both practical and normatively superior. Several chapters present a reflection on business ethics from a societal or macro-organizational point of view. It makes a case for the economic and moral superiority of the sustainability capitalism of the European Union over the finance-based model of the United States. Most major themes in business ethics are covered and some new ones are introduced, including the topic of the right way to teach business ethics. The general approach adopted in this volume is Kantian. Alternative approaches are critically evaluated.

​Norman E. Bowie is the former Elmer L Andersen Chair in Corporate Responsibility at the University of Minnesota. He has authored or edited 16 books and over 75 articles. Professor Bowie is the leading scholar in the application of Kant's moral philosophy to business. His book on that topic is Business Ethics: A Kantian Perspective and has been translated into Chinese and Japanese. His co-edited text Ethical Theory and Business is in the 9th edition. He has held a position as Dixons Professor of Business Ethics and Social Responsibility at the London Business School and been a fellow at Harvard's Program in Ethics and the Professions. He is past president of the Society for Business Ethics, the American Society for Value Inquiry and is past Executive Director of the American Philosophical Association. He is the former Associate Editor of Business Ethics Quarterly In August 2009 he received the first life time  achievement award in scholarship present by the Society for Business Ethics. In 2012 a feschrift Kantian Business Ethics honoring his work was published by Edward Elgar