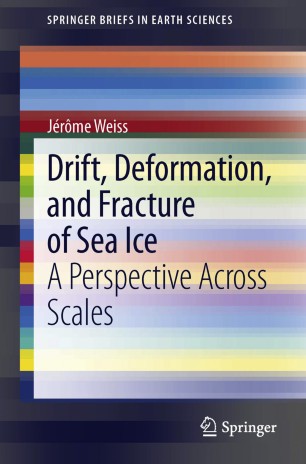 A Perspective Across Scales

Sea ice is a major component of polar environments, especially in the Arctic where it covers the entire Arctic Ocean during most of the year. However, in a context of climate change, the Arctic sea ice cover has been declining significantly over the last decades, either in terms of concentration or thickness. The sea ice cover evolution and climate change are strongly coupled through the albedo positive feedback, thus possibly explaining the Arctic amplification of climate warming. In addition to thermodynamics, sea ice kinematics (drift, deformation) appears as an essential player in the evolution of the ice cover through a reduction of the average ice age (and so of thickness), or ice export out of the Arctic. This is a first motivation for a better understanding of kinematical and mechanical processes of sea ice. A more upstream, theoretical motivation is a better understanding of brittle deformation of geophysical objects across a wide range of scales. Indeed, owing to its very strong kinematics, compared e.g. to the Earth’s crust, an unrivaled kinematical dataset is available for sea ice from in-situ (e.g. drifting buoys) or satellite observations. Here we review recent advances on the understanding of sea ice drift, deformation and fracturing obtained from these data. We particularly focus on the scaling properties in time and scale that characterize these processes, and we emphasize the analogies that can be drawn with the deformation of the Earth’s crust. These scaling properties, which are the signature of long-range elastic interactions within the cover, constrain future developments in the modeling of sea ice mechanics. We also show that kinematical and rheological variables such as average velocity, average strain-rate or strength have significantly changed over the last decades, accompanying and actually strengthening the Arctic sea ice decline.