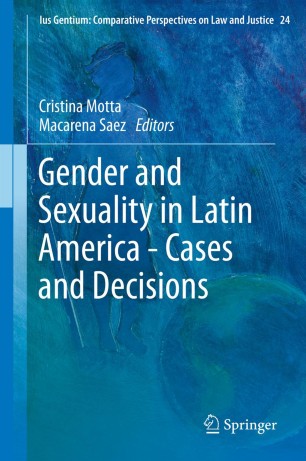 Gender and Sexuality in Latin America - Cases and Decisions

Translated and updated from the seminal Spanish text on legal decisions affecting gender and sexuality in Latin America, this English edition is the only law text to focus specifically on the rights of lesbians, gays, bisexuals and the transgender population in addition to women’s rights more broadly. The volume provides close analysis of some of the most important decisions made by Latin American national courts, as well as those made by international legal bodies, that affect the rights and interests of these groups. Specially selected for their depth of argument and value as exemplars, the studies of good legal practice chart the path of the region’s normative values of justice as they have evolved away from a partial, and patriarchal, exercise of the law. They show how cases with vastly differing contexts such as, property rights and domestic violence have resulted in a mixed body of Latin American law.  Some decisions are  protective of women’s and minority rights. Some assess the wider social impacts of case law in which recognition of the discrete legal identities within households challenges established precepts, including religious ones. Other cases have been chosen as cautionary examples of bad decision-making and for the poverty of their legal debate. Updated to include the latest relevant jurisprudence from across the continent, this book is an informed, cohesive and comprehensive guide to understanding women’s and gender-based rights in Latin America.​

Affirmative Actions In The Workplace Agrarian Reform And Gender Equality Best Interest Of The Child Citizenship as Belonging Citizenship as an Aspiration Crimes Of Violence Against Women Cultural Valuation Of Care Work Emergency Contraception Employment And Care Of Persons Equality As A Means To Not Discriminate Men Equality Before the Law Equality In Access To The Labor Market Equality Of Rights Within The Family Equality, Reparation, and Emancipation Equality: Form and Substance Health, Technology, And Contraception Identity and Culture Legal Insecurity Of Non Punishable Abortion Linking The Feminine Identity To Maternity Moral Imperatives As Limits To Equality Murder Of Women Because They Are Women Parental Leaves And Breaks Protection For Domestic Workers Rape As Torture Resignation In The Face Of Violence Right To Health And Adolescence Sanction For Maternity Sexual And Non Sexual Violence Sexual Harassment Sterilization, Health, Or Autonomy The Feminine Identity, Reproductive Work The Salary Gap And Women’s Work Victims Of Sexual Violation Violence As Criterion To Evaluate Self-Defense Women’s Responsabilization