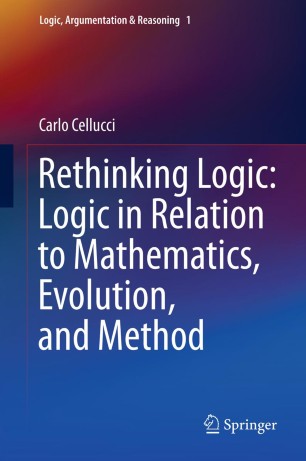 Rethinking Logic: Logic in Relation to Mathematics, Evolution, and Method

This volume examines the limitations of mathematical logic and proposes a new approach to logic intended to overcome them. To this end, the book compares mathematical logic with earlier views of logic, both in the ancient and in the modern age, including those of Plato, Aristotle, Bacon, Descartes, Leibniz, and Kant. From the comparison it is apparent that a basic limitation of mathematical logic is that it narrows down the scope of logic confining it to the study of deduction, without providing tools for discovering anything new. As a result, mathematical logic has had little impact on scientific practice.

Therefore, this volume proposes a view of logic according to which logic is intended, first of all, to provide rules of discovery, that is, non-deductive rules for finding hypotheses to solve problems. This is essential if logic is to play any relevant role in mathematics, science and even philosophy. To comply with this view of logic, this volume formulates several rules of discovery, such as induction, analogy, generalization, specialization, metaphor, metonymy, definition, and diagrams. A logic based on such rules is basically a logic of discovery, and involves a new view of the relation of logic to evolution, language, reason, method and knowledge, particularly mathematical knowledge. It also involves a new view of the relation of philosophy to knowledge. This book puts forward such new views, trying to open again many doors that the founding fathers of mathematical logic had closed historically.

“Cellucci puts logic back in its place, after it was turned upside down by the drifts of AP (analytical philosophy), which pushed the search for certainty and foundations too far.” (Emiliano Ippoliti, Epistemologia, Vol. 38 (2), July-December, 2015)

“This textbook traces the history of Logic ranging from epistemology to induction and deduction. … I can recommend it to the philosophical audience for which it is addressed.” (Joseph Grenier, Amazon.com, March, 2014)

“Rethinking Logic is a valuable and remarkable book, especially because it does not resemble to any of the books dealing with logic which normally can be found on the market. … It is … a global and wide philosophical reflection on what logic and knowledge are, which argues for a theoretically purposeful view, with which one may obviously disagree, but with which it is certainly interesting confronting.” (Fabio Sterpetti, Philosophical Inquiries, Vol. 2 (2), 2014)