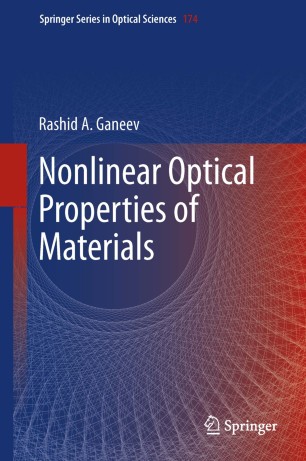 We show how the nonlinear optical analysis of materials leads to improvement of their high-order nonlinear optical response during the interaction with strong laser fields. Ablation-induced nanoparticles formation is correlated with their applications as efficient sources of coherent short-wavelength photons. From other side, recent achievements of harmonic generation in plasmas are closely related with the knowledge of the properties of materials in the laser plumes. All of these studies are concerned with the low-order nonlinear optical features of various materials. The novelty of the approach developed in present book is related with inter-connection of those studies with each other.

Dr. R. A. Ganeev was involved in the studies of the generation of laser pulses with hypergaussian spatial and temporal profiles and the low-order harmonic generation of laser radiation using such tailored beams in nonlinear crystals with record conversion efficiencies known so far. The laser harmonic generation from excited ionic gallium beams was demonstrated for the first time. It was shown that the presence of excited states in the ionic media leads to the considerable increase of nonlinear optical susceptibilities. The ninth harmonic generation in gaseous media with highest conversion efficiency was demonstrated. The third harmonic generation in the isotropic media with positive dispersion was achieved for the first time. It was shown that the nonlinear variations of refractive index lead to the phase-matching conditions in the ultraviolet region. The optical characteristics of the laser plasma produced by the radiation of different pulse duration were investigated.
Dr. Ganeev initiated the systematic studies of the nonlinear optical properties of various media. The nonlinear optical parameters (nonlinear refractive indices, nonlinear susceptibilities, multi-photon and saturated absorption coefficients, etc) of colloidal metal solutions, metal-doped organic polymers, low-excited plasmas, semiconductor chalcogenide films and solutions, dye vapors and solutions, metal-doped glasses and polymers, nonlinear crystals, liquids, fullerenes, fullerene-doped organic films, etc, were analyzed. On the base of these studies the optical limiting in fullerene-doped solutions, colloidal metals and semiconductors was achieved. The investigations of the third harmonic generation of picosecond Nd:YAG laser radiation in colloidal metals, metal-doped organics and glasses, fullerenes, dye vapors and solutions were carried out, and their nonlinear susceptibilities were analyzed in the frames of the influence of self-action processes on the harmonic generation. The third harmonic generation in dye vapors caused by the difference frequency generation was proposed and observed for the first time.