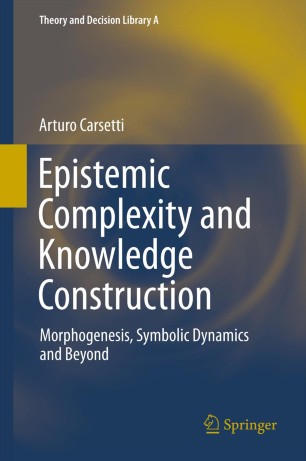 Morphogenesis, symbolic dynamics and beyond

Part of the Theory and Decision Library A: book series (TDLA, volume 45)

Pace Kant, at the level of a biological cognitive system sensibility is not a simple interface between absolute  chance and an invariant intellectual order. On the contrary, the reference procedures, if successful, are able to modulate canalization and create the basis for the appearance of ever-new frames of incompressibility through morphogenesis. This is not a question of discovering and directly exploring (according, for instance, to Putnam’s conception) new “territories”, but of offering ourselves as the matrix and arch through which they can spring autonomously in accordance with ever increasing levels of complexity. There is no casual autonomous process already in existence, and no possible selection and synthesis activity via a possible “remnant” through reference procedures considered as a form of simple regimentation. These procedures are, in actual fact, functional to the construction and irruption of new incompressibility: meaning, as Forma formans, offers the possibility of creating a holistic anchorage, and is exactly what allows the categorial apparatus to emerge and act according to a coherent “arborization”. However, at the biological level,  what is innate is the result of an evolutionary process and is “programmed” by natural selection. Natural selection is the coder once linked to the emergence of meaning: at the same time,  this emergence process is indissolubly correlated to the continuous construction of new formats in accordance with the unfolding of ever new mathematics, a mathematics that necessarily moulds coder’s activity.  Hence the necessity of articulating and inventing a mathematics capable of engraving itself in an evolutionary landscape in accordance with the opening up of meaning. In this sense, for instance, the realms of non standard-models and non-standard analysis represent, today,  a fruitful perspective in order to point out, in mathematical terms, some of the basic concepts concerning the articulation of an adequate intentional information theory. This individuation, on the other side, presents itself not only as an important theoretical achievement but also as one of the essential bases of our very evolution as intelligent organisms. The objectivity of Reality is also proportionate to the autonomy reached by cognitive processes.