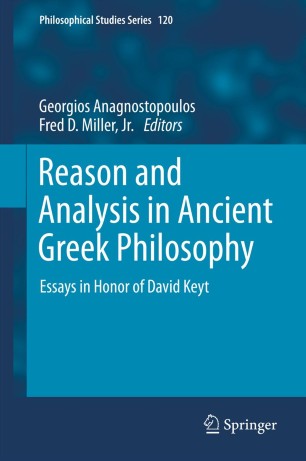 Essays in Honor of David Keyt

This distinctive collection of original articles features contributions from many of the leading scholars of ancient Greek philosophy.  They explore the concept of reason and the method of analysis and the central role they play in the philosophies of Socrates, Plato, and Aristotle.   They engage with salient themes in metaphysics, epistemology, ethics, and political theory, as well as tracing links between each thinker’s ideas on selected topics.

The volume contains analyses of Plato’s Socrates, focusing on his views of moral psychology, the obligation to obey the law, the foundations of politics, justice and retribution, and Socratic virtue. On Plato’s Republic, the discussions cover the relationship between politics and philosophy, the primacy of reason over the soul’s non-rational capacities, the analogy of the city and the soul, and our responsibility for choosing how we live our own lives. The anthology also probes Plato’s analysis of logos (reason or language) which underlies his philosophy including the theory of forms. A quartet of reflections explores Aristotelian themes including the connections between knowledge and belief, the nature of essence and function, and his theories of virtue and grace.

The volume begins with an intellectual memoir by David Keyt that recounts his adventures as a philosopher and scholar during the rise of analytic classical scholarship in the past century. Along the way, Keyt relates entertaining anecdotes involving major figures in modern academic philosophy. Blending academic authority with creative flair and demonstrating the continuing interest of ancient Greek philosophy, this book will be a valuable addition to the libraries of all those studying and researching the origins of Western philosophy.

"These essays in honor of David Keyt exemplify the virtues that he himself has brought to bear on the study of ancient Greek philosophy: precision in the formulation of problems, together with ingenuity and originality in offering solutions. His autobiographical essay is a marvelous reminiscence of a rich, varied, and productive life in academia." Professor Richard Kraut, Northwestern University

"In his long life in philosophy, David Keyt’s original, rigorous and provocative work has ranged from Aristotle’s and Plato’s metaphysics to their ethical and political thought. In this correspondingly wide-ranging collection his colleagues, friends and former students honor his notable contributions to all these fields in an outstanding collection of essays." Professor Julia Annas, University of Arizona

“This an excellent collection of the work of students and colleagues of Professor David Keyt covering a broad range of important work on Socrates, Plato, and Aristotle. The papers are easily accessible to readers interested in ancient Greek philosophy and advance the debate in their respective topics. They demonstrate the quality and breadth of Professor Keyt’s extraordinary scholarly career.”  Professor Hugh H. Benson, University of Oklahoma

"A fitting tribute to David Keyt. Anyone interested in Socrates, Plato, or Aristotle will find in it material well worth reading." Professor Norman Dahl, University of Minnesota