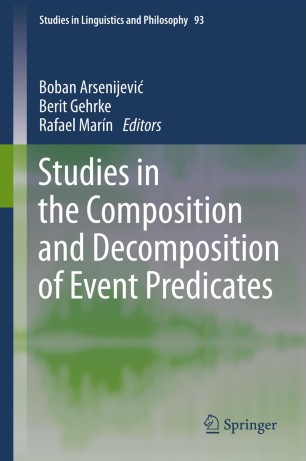 Studies in the Composition and Decomposition of Event Predicates

Part of the Studies in Linguistics and Philosophy book series (SLAP, volume 93)

The volume shows how advances in the linguistic theory of event predicates, which have spawned Davidsonian and neo-Davidsonian notions of event arguments, in addition to ‘event structure’ frameworks and mereological models for the eventuality domain, have sidelined research on specific sets of entailments that support a typology of event predicates. Addressing this imbalance in the literature, the work also presents evidence indicating a more complex role for scalar structures than currently assumed. It will enrich the work of semanticists, psycholinguists, and syntacticians with a decompositional approach to verb phrase structure.

Boban Arsenijević is a Ramon y Cajal researcher at the Consejo Superior de Investigaciones Cientificas in Madrid. His interests cover different topics in syntax and semantics, including the issues of verbal aspect, clausal embedding, the nature of and mutual relations between syntactic categories and the comparative cognitive status of natural language.

Berit Gehrke is a Juan de la Cierva researcher at the Universitat Pompeu Fabra in Barcelona. She is interested in semantics and the syntax-semantics interface and has worked on topics related to event predicates, time and space, the kind-token distinction, and modification.