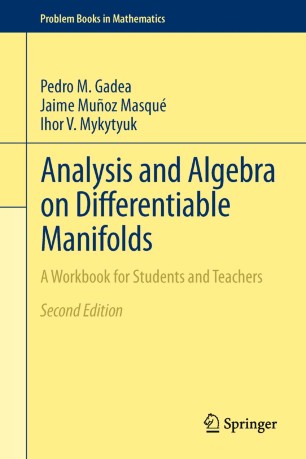 Analysis and Algebra on Differentiable Manifolds

A Workbook for Students and Teachers

This is the second edition of this best selling problem book for students, now containing over 400 completely solved exercises on differentiable manifolds, Lie theory, fibre bundles and Riemannian manifolds.

The exercises go from elementary computations to rather sophisticated tools. Many of the definitions and theorems used throughout are explained in the first section of each chapter where they appear.

A 56-page collection of formulae is included which can be useful as an aide-mémoire, even for teachers and researchers on those topics.

In this 2nd edition:
• 76 new problems
• a section devoted to a generalization of Gauss’ Lemma
• a short novel section dealing with some properties of the energy of Hopf vector fields
• an expanded collection of formulae and tables
• an extended bibliography

This book will be useful to advanced undergraduate and graduate students of mathematics, theoretical physics and some branches of engineering with a rudimentary knowledge of linear and multilinear algebra.

Professor Pedro M. Gadea taught at the Universities of Santiago de Compostela and Valladolid, Spain. He is now a scientific researcher at the Instituto de Física Fundamental, CSIC, Madrid, Spain. He has published more than sixty research papers on several topics of differential geometry, algebraic topology and automatic speech recognition. He has also been advisor of four PhD theses. His current interests are in differential geometry, and specifically in Riemannian, Kähler, quaternion-Kähler and Spin(9) manifolds and structures, and their applications to supergravity. Outside of mathematics, his chief interests are history and minerals.

Professor J Muñoz Masqué taught at the University of Salamanca, Spain. He is currently a scientific researcher at the Instituto de Seguridad de la Información (ISI), CSIC, Madrid, Spain. He has written more than one hundred research articles on calculus of variations, Riemannian geometry, differential invariants, gauge theories, and public key cryptography, and he is currently studying on these topics. Outside of mathematics, his chief interests is Spanish poetry.

Professor Ihor Mykytyuk teaches at the Pedagogical University of Cracow, Poland. He is Head of Department at the Pidstryhach Institute of Applied Problems of Mechanics and Mathematics, NASU, L'viv, Ukraine. He has published more than thirty research papers on several topics of differential geometry, Lie groups theory and integrable dynamical systems. He is a co-author of two monographs on these topics. His current interests are in differential geometry and Lie groups theory, and specifically in Riemannian, Kähler, hyper-Kähler and Spin(9) structures possessing rich groups of symmetries. Outside of mathematics, his main interests are history and bicycle travels.

The authors have made quite a few interesting and timely additions to their first edition including an elegant proof of the fact that the real projective plane minus a point is diffeomorphic with the infinite Mobius strip, and expanded coverage of Hamiltonian and Hopf vector fields.

Professors Gadea, Masqué and Mykytyuk have produced a workbook that appears to be an equally useful supplement for either a primarily theoretical or an application oriented course on differential geometry or differential topology.

This exceptional workbook puts me in mind of a mightily enhanced Schaum’s outline, and I have an abiding respect for the educational value of the Schaum’s series. A mastery of the material in this workbook would, I think, stand as compelling evidence of a very strong grounding in the fundamentals of modern differential geometry and related areas.

The authors deserve kudos for this admirable contribution to Springer’s Problem Books in Mathematics series. It is bound to be an excellent learning tool for students of differential geometry and differential topology at any level as well as a handy reference for experts in these fields. In the gallery of scientific self-help literature, in which kitsch abounds, this workbook certainly qualifies as high art. One thing for sure, when next I teach a course in differential geometry or differential topology, I am certainly going to recommend this workbook as a supplementary text.

This is the second edition of a book which first appeared in 2001 under the name of the first two authors only. Its main intention is to provide a large collection of worked-out problems and exercises on modern differential geometry at an advanced undergraduate and graduate level. The prerequisites are some knowledge of linear and multilinear algebra, the calculus of several variables, point-set topology and some acquaintance with the concept of a manifold and the topology of fibre bundles.

The book contains 412 solved problems of varying degree of complexity and difficulty. They are spread over the first six chapters which deal with, respectively, the following topics: differentiable manifolds, tensor fields and differential forms, integration on manifolds, Lie groups, fibre bundles and Riemannian geometry. Each chapter starts with a brief overview of the main definitions, concepts and properties of the topic involved, and ends by making reference to some useful books for further reading. The material is presented in a clear and lucid way. With respect to the first edition, 39 problems have been deleted and 76 new problems have been added with, among others, some problems on symplectic geometry and Hamiltonian mechanics, on the adjoint representation of a Lie group, on homogeneous spaces related to the exceptional Lie group G_2, on the Godbillon-Vey class, and on the structure of the Kodaira-Thurston manifold. The final chapter, Chapter 7, provides an extended list of formulae from the calculus on manifolds, and tables concerning important spaces and Lie groups.

This book, which is rather unique in its kind, can be regarded as a valuable training book for everyone interested in becoming acquainted with the language and techniques of modern differential geometry. In particular, it can serve as a most helpful tool, both for students and teachers of a course on the subject. Moreover, the book is very nicely edited, containing many illustrative figures.

The new edition has an added author and is published in hard covers. The authors tell us that 39 problems have been deleted and 76 have been added. Other changes include: The Einstein summation convention is no longer used. (Hurray!) There is a section on what happens if one drops the standard topological assumptions (Hausdorff and second-countable) in the definition of a differentiable manifold. Several of the more advanced sections (on Lie groups, characteristic classes, connections) have been significantly expanded. A final chapter gives a collection of formulas and tables relevant to differential geometry. This book is an excellent resource for teachers and students of these topics.

© The Mathematical Association of America, 2013. All rights reserved.

This is a collection of solved problems on differentiable manifolds, Lie groups, and Riemannian geometry. It is intended as a supplement rather than as a standalone text. There are plenty of pictures to accompany the problems, including a few in color. The solutions are detailed, with many calculations written out in full, making some of the book's pages look like a mass of symbols.

The problems are complemented by two chapters, at the end of the book, intended to help orient the reader. The first is a kind of "fascicule de resultats": a collection of definitions and theorems. For most users of the book, the main role of this chapter will be to fix notation. Chapter 8, "Some Formulas and Tables," is more interesting. It collects such things as the general formula for stereographic projection, formulas for Lie derivatives and wedge products of differential forms, and lists of the classical groups and their Lie algebras. I find this chapter very useful, both in solving the problems in the book and as a place to find information quickly when Wikipedia is not reachable.

I suspect the book will be particularly useful to instructors who are not specialists in the subject; most of the results and problems here are likely to be familiar to those working in the field. I would certainly want to have this book on hand if I were to teach such a course.

© The Mathematical Association of America, 2013. All rights reserved.