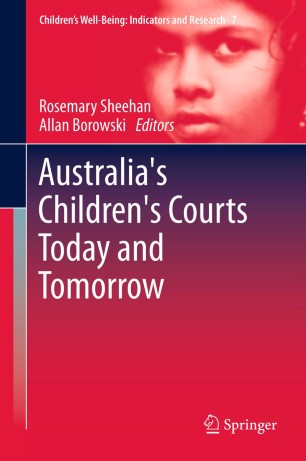 The Children’s Court is one of society’s most important social institutions. At the same time, it is steeped in controversy. This is in large measure due to the persistence and complexity of the problems with which it deals, namely, juvenile crime and child abuse and neglect.
Despite the importance of the Children’s Court as a means of holding young people accountable for their anti-social behaviour and parents for the care of their children, it has not been the subject of close study. Certainly it has not been previously studied nationally. This edited collection, is based on the findings of study that spanned the six States and two Territories of Australia. The study sought to examine the current challenges faced by the Children’s Court and to identify desirable and feasible directions for reform in each State and Territory. A further unique feature of this study is that it canvassed the views of judges and magistrates who preside over this court.

Allan Borowski is Professor of Social Work and Social Policy, Department of Social Work and Social Policy, Faculty of Health Sciences, La Trobe University, Melbourne campus, Victoria 3086. He is a Fellow of the Academy of Social Sciences in Australia a member of the Research Panel, Criminology Research Council. Rosemary Sheehan is Associate Professor in the Department of Social Work, Monash University, Victoria; she holds a Governor-in-Council appointment to the Children’s Court of Victoria to conduct alternative dispute resolution conferences and is a member of the Victorian Child Death Review Committee.