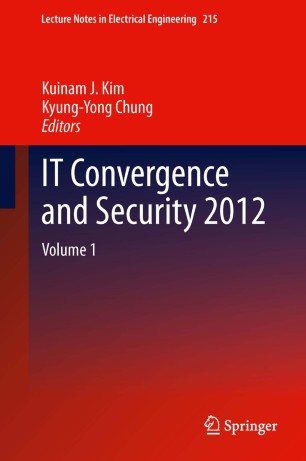 IT Convergence and Security 2012

The proceedings approaches the subject matter with problems in technical convergence and convergences of security technology. This approach is new because we look at new issues that arise from techniques converging. The general scope of the proceedings content is convergence security and the latest information technology. The intended readership are societies, enterprises, and research institutes, and intended content level is mid- to highly educated personals.

The most important features and benefits of the proceedings are the introduction of the most recent information technology and its related ideas, applications and problems related to technology convergence, and its case studies and finally an introduction of converging existing security techniques through convergence security. Overall, through the proceedings, authors will be able to understand the most state of the art information strategies and technologies of convergence security.

Kuinam J. Kim is a professor and chairman of the Department of Convergence Security at Kyoung-gi University(KGU) in Kyoung-gi, Korea. He is also President of the Center for Industry Security supported by Ministry of Knowledge and Economy, Korea. Professor Kim received Ph.D degree in Industrial Engineering from the Colorado State University. His current fields of specialization are internet-based computing models, computer and networks forensics, infrastructure security, software security, multimedia security, and scientific and technical information. He has been Principal Investigator of several multimillion dollar projects funded by government agencies. The projects include Center for Industry Security, funded by Ministry of Knowledge and Economy Korea, Active Security Mechanism based on Active Networking technique funded by Agency for Defense Development, Total Information Security Development for The Execution of the Future War funded by Ministry of National Defense Korea, Development of Knowledge Platform funded by Electronics and Telecommunications Research Institute. He has received several technical and publishing awards, and rewards including Minister of Knowledge Economy Commendation (Industry Technology Security) and Minister of Public Administration and Security Commendation (Digital Forensic).