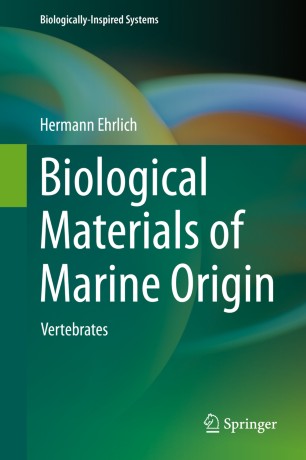 This work is a source of modern knowledge on biomineralization, biomimetics and materials science with respect to marine vertebrates. For the first time in scientific literature the author gives the most coherent analysis of the nature, origin and evolution of biocomposites and biopolymers isolated from and observed in the broad variety of marine vertebrate organisms (fish, reptilian, birds and mammals) and within their hierarchically organized structural formations. The basic format is that of a major review article, with liberal use of references to original literature. There is a wealth of new and newly synthesized information, including dozens of previously unpublished images of unique marine creatures including extinct, extant and living taxa and their mineralized and un-mineralized structures from nano- to micro – and macroscale. The material is organized effectively along both biological (phyla) and functional lines. Several modern topics e.g. “Biohalite”, or “Fish Skin: From Clothing to Tissue Engineering”, as well as “Silica-based Minerals in Marine Vertebrates”, are never represented and discussed in previously published books. For the first time such current concepts as hierarchical organization of biocomposites and skeletal structures, structural bioscaffolds, biomimetism and bioinspiration as tools for the design of innovative materials are critically analyzed from both biological and materials science point of view using numerous unique examples of marine vertebrate origin. This monograph reviews the most relevant advances in the marine biological materials research field, pointing out several approaches being introduced and explored by distinct modern laboratories.

The objective of the book is for the scientists as well as for the senior or graduate standing in engineering or science to gain a solid appreciation for the special significance of the word marine biological materials as well as the rapid and exciting evolution and expansion of biomaterials science and its applications in modern technology and medicine.