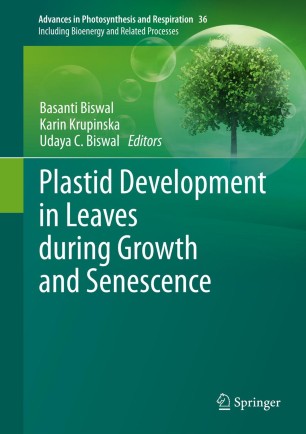 Plastid Development in Leaves during Growth and Senescence

Part of the Advances in Photosynthesis and Respiration book series (AIPH, volume 36)

The major function of chloroplasts in green plants and algae is oxygenic photosynthesis. Further, chloroplasts manufacture essential metabolites and phytohormones. Because of the extensive interconnection with cellular metabolic and regulatory networks, development of the organelle and the organism are coordinately regulated. Conversion of proplastids to chloroplasts is associated with the development of the entire organism, and dismantling of chloroplasts during the chloroplast-to-gerontoplast transition is coupled to senescence, the terminal phase of development. The availability of genomic tools of model plants, especially those of Arabidopsis, have allowed us to understand many complex problems associated with organelle biogenesis and senescence. Twenty-eight chapters in this book provide updated information on chloroplast development. The dynamic nature of plastid genome expression, regulation, and stability during development have been critically reviewed. In addition, authors describe how the development of emerging techniques and tools of bioinformatics, as well as rapid progress in plant molecular biology, have significantly expanded our knowledge in the area of biogenesis of the chloroplast. The book reviews the current literature on the coordinated synthesis of lipids, pigments and proteins, trafficking of the essential components, the assembly and the regulation of the protein complexes in the thylakoids as well as of the CO2-fixing enzyme Rubisco. The book provides information on genetically programmed leaf senescence and regulated disassembly of the organellar complexes during chloroplast to gerontoplast transformation. The book also deals with the response of the developing chloroplast to environmental signals through modifications and adaptation. This book was designed for those interested in plastid biology, plant development and photosynthesis, but will also be of general interest to plant biologists.