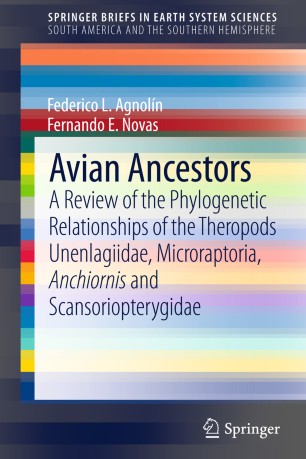 Although consensus exists among researchers that birds evolved from coelurosaurian theropods, paleontologists still debate the identification of the group of coelurosaurians that most closely approaches the common ancestor of birds. The last 20 years witnessed the discovery of a wide array of avian-like theropods that has considerably amplified the anatomical disparity among deinonychosaurians, some of which resemble Archaeopteryx more than Deinonychus. Among these newly discovered theropods that show remarkable bird-like characteristics are the four-winged theropods Microraptor and Anchiornis, and the unenlagiids Unenlagia, Buitreraptor, and Rahonavis. A bizarre group of minute-sized coelurosaurs, the Scansoriopterygidae, also exhibits some avian similarities that lead some authors to interpret them as more closely related to birds than other dinosaurs. With the aim to explore the phylogenetic relationships of these coelurosaurians and birds, we merged recently published integrative databases, resulting in significant changes in the topological distribution of taxa within Paraves. We present evidence that Dromaeosauridae, Microraptoria, Unenlagiidae, and Anchiornis + Xiaotingia form successive sister taxa of Aves, and that the Scansoriopterygidae are basal coelurosaurians not closely related to birds. The implications in the evolutionary sequence of anatomical characters leading to birds, including the origin of flight, are also considered in light of this new phylogenetic hypothesis.