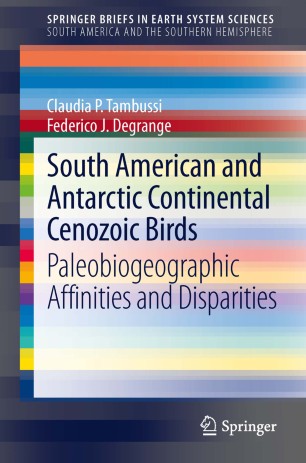 Modern birds (Neornithes) are represented by two big lineages, the Palaeognathae (Tinamiformes + Ratitae) and the Neognathae [Galloanserae + Neoaves (Metaves + Coronoaves)]. Both clades sum approximately 10,000 species of which 60% are Passeriformes (the most diverse clade of terrestrial vertebrates). A comparison between the past and the present reveals a complex and hallmarked evolutionary and biogeographic history which would have begun over 65 million years ago. For South America (SA) this includes: (1) the presence of taxa with uncertain affinities and the absence of Passeriformes during the Paleogene; (2) a progressive and accelerated increase of the species starting at the Neogene (Miocene); (3) important extinct lineages (e.g. Phorusrhacidae, Teratornithidae) that migrate to North America after the rising of the Panamá isthmus; (4) groups with major diversification in the Neogene that survives nowadays represented by scarce species endemic of SA (Cariamidae) or that inhabits mainly in the southern hemisphere (Anhingidae); (5) very diverse living groups with scarce (e.g., Passeriformes) or none (e.g., Apodiformes) fossil record in SA, which stem-groups are registered in Europe. Apparently, the changes in diversity of the south American Neornithes have been the result of successive radiation, biogeographic connections with North America and in a minor scale, some extinctions. The opening of the Drake´s passage and the occurrence of the circumpolar Antarctic flow are not sufficient causes to explain the highly disparity between the weddelians penguins (Sphenisciformes) of Antartica and those of the patagonian Atlantic Ocean.