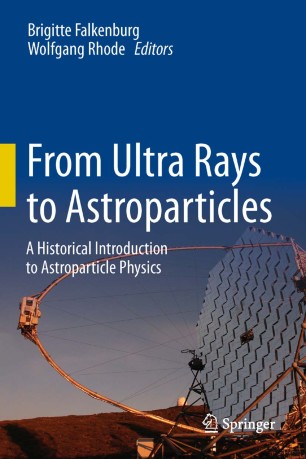 From Ultra Rays to Astroparticles

A Historical Introduction to Astroparticle Physics

The book is a historical introduction to astroparticle physics. Its scope is to give an overview of this complex field of research, starting with the discovery of cosmic rays (Victor Hess, 1912) until the current experiments with particle telescopes.

The book focuses on the ways in which physics changes in the course of this history. The following changes run parallel, overlap, and/or

particles, the Cosmic Microwave Background and its anisotropies, but also progress through non-discoveries (monopoles) etc.

- The change of the description of nature in physics, as consequence of

the scientific revolutions at the beginning of the 20th century, giving rise to quantum physics, relativity, etc.

- The change of experimental methods, cooperations, and disciplinary divisions.

With regard to the latter change, a main topic of the book is to make the specific multi-disciplinary features of astroparticle physics clear to undergraduate and graduate students, historians of physics, and philosophers of science.

“This book is a collection of ten articles written by expert contributors who describe current work in a technological and historical context. … Each article gives a thorough account and includes many references for further study. … This is an excellent resource for anyone interested in the field and a useful supplement to lecture courses. Summing Up: Highly recommended. Upper-division undergraduates, graduate students, researchers/faculty, and professionals.” (M. Dickinson, Choice, Vol. 50 (11), July, 2013)
Buy options