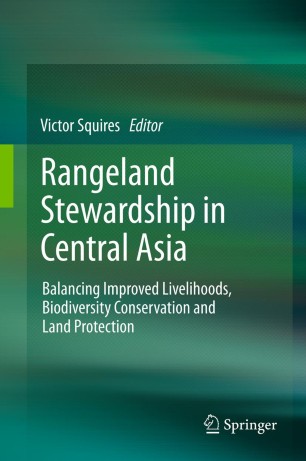 This volume of 18 chapters is the work of more than 30 authors, many of whom are natives of the Central Asian region or are researchers who have dedicated a large part of their working lives to studying the dynamics of people, livestock and climate (both physical and socio-political) in this vast and fascinating region.  The work focuses on the 20 years since most of the countries in the region received independence after the collapse of the Soviet Union in 1990. But it also traces the attitudes of land users to the land dating from the before late 19th century, when Russian conquest and colonization occurred, and through the upheavals caused by Soviet-style collectivization and sedentarization.  De-collectivization has created its own dilemmas, not the least of which are those related to land tenure and access rights to grazing lands and these are discussed in the context of land stewardship.
The Central Asian region is huge and very diverse in agro-ecologies and production systems. Even though the countries are now moving into different directions of overall and policy development, the fundamental issues of sustainable agricultural development remain common for all countries of the region. Better land stewardship is a foundation for this strategic approach.
The book is rich with new data presented in 68 easy to understand charts/graphs (many in color) and 50 Tables.  Much of the information is new and was generated for this book by experts working in-country. It presents for the first time in English a digest of a plethora of previously inaccessible Russian reports and scientific literature that will be invaluable for development agencies, including UN, World Bank, Asian Development Bank, Islamic Bank as well as to students of this vast and fascinating region who seek up to date and authoritive information.