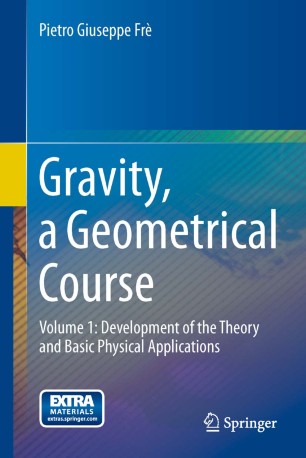 Volume 1: Development of the Theory and Basic Physical Applications

‘Gravity, a Geometrical Course’ presents general relativity (GR) in a systematic and exhaustive way, covering three aspects that are homogenized into a single texture: i) the mathematical, geometrical foundations, exposed in a self consistent contemporary formalism, ii) the main physical, astrophysical and cosmological applications,  updated to the issues of contemporary research and observations, with glimpses on supergravity and superstring theory, iii) the historical development of scientific ideas underlying both the birth of general relativity and its subsequent evolution. The book is divided in two volumes.

Volume One is dedicated to the development of the theory and basic physical applications. It guides the reader from the foundation of special relativity to Einstein field equations, illustrating some basic applications in astrophysics. A detailed  account  of the historical and conceptual development of the theory is combined with the presentation of its mathematical foundations.  Differentiable manifolds, fibre-bundles, differential forms, and the theory of connections are covered, with a sketchy introduction to homology and cohomology. (Pseudo)-Riemannian geometry is presented both in the metric and in the vielbein approach. Physical applications include the motions in a Schwarzschild field leading to the classical tests of GR (light-ray bending and periastron advance) discussion of relativistic stellar equilibrium, white dwarfs, Chandrasekhar mass limit and polytropes. An entire chapter is devoted to tests of GR and to the indirect evidence of gravitational wave emission. The formal structure of gravitational theory is at all stages compared with that of non gravitational gauge theories, as a preparation to its modern extension, namely supergravity, discussed in the second volume.

Pietro Frè is Professor of Theoretical Physics at the University of Torino, Italy. He has taught General Relativity for 15 years.

Pietro Frè is Professor of Theoretical Physics at the University of Torino, Italy and is currently serving as Scientific Counsellor of the Italian Embassy in Moscow. His scientific passion lies in supergravity and all allied topics, since the inception of the field, in 1976. He was professor at SISSA, worked in the USA and at CERN. He has taught General Relativity for 15 years. He has previously published two scientific monographs, “Supergravity and Superstrings” and “The N=2 Wonderland”. He is also the author of a popular science book on cosmology (“Il fascino oscuro dell’inflazione”, Springer 2009), and two novels, in Italian.