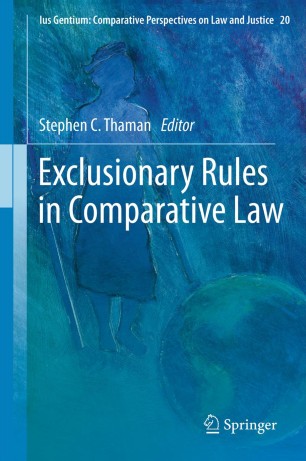 This book is a comparative study of the exclusion of illegally gathered evidence in the criminal trial , which includes 15 country studies, a chapter on the European Court of Human Rights, and a comparative synthetic conclusion.  No other book has undertaken such a broad comparative study of exclusionary rules, which have now become a  world-wide phenomenon. The topic is one of the most controversial in criminal procedure law, because it reveals a constant tension between the criminal court’s duty  to ascertain the truth, on the one hand, and its duty to uphold important constitutional rights on the other,  most importantly, the privilege against self-incrimination and the right to privacy in one's home and one's private communications.

The chapters were contributed by noted world experts on the subject for the XVIII Congress of the International Academy of Comparative Law in Washington in July 2010.