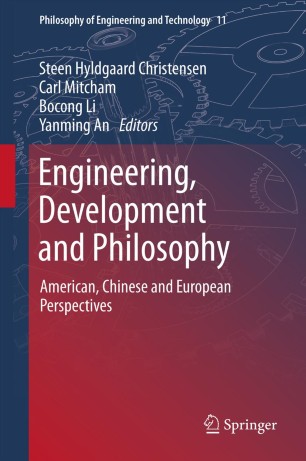 Part of the Philosophy of Engineering and Technology book series (POET, volume 11)

This inclusive, cross-cultural study rethinks the nexus between engineering, development, and culture. It offers diverse commentary from a range of disciplinary perspectives on how the philosophies of today’s cultural triumvirate—American, European and Chinese—are shaped and given nuance by the cross-fertilization of engineering and development. Scholars from the humanities and social sciences as well as engineers themselves reflect on key questions that arise in this relational context, such as how international development work affects the professional views, identities, practice and ethics of engineers.   The first volume to offer a systematic and collaborative study that cuts across continental boundaries, the book delineates the kinds of skills and competences that tomorrow’s engineering success stories will require, and analyzes fascinating aspects of the interplay between engineering and philosophy, such as how traditionally Chinese ways of thinking can influence modern engineering practice in the world’s most populous country. China’s problematic mix of engineering woes and wonders, from the high-profile crash on its high-profile rail network to its ‘bird’s nest’ Olympic stadium, adds to the urgency for reform, while Europe’s Enlightenment-informed legal frameworks are contrasted with Chinese mechanisms in their governance of the field of nanotechnology, a crucial element of future technical evolution. Fascinating and compelling in equal measure, this volume addresses one of the topics at the leading edge of humanity’s quest to survive, and to thrive.​