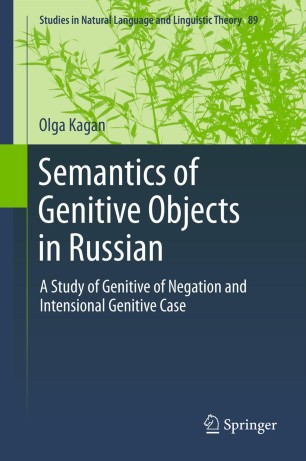 Semantics of Genitive Objects in Russian

A Study of Genitive of Negation and Intensional Genitive Case

The genitive/accusative opposition in Slavic languages is a decades-old linguistic conundrum. Shedding new light on this perplexing object-case alternation in Russian, this volume analyzes two variants of genitive objects that alternate with accusative complements—the genitive of negation and the intensional genitive. The author contends that these variants are manifestations of the same phenomenon, and thus require an integrated analysis. Further, that the choice of case is sensitive to factors that fuse semantics and pragmatics, and that the genitive case is assigned to objects denoting properties at the same time as they lack commitment to existence.

Kagan’s subtle analysis accounts for the complex relations between case-marking and other properties, such as definiteness, specificity, number and aspect. It also reveals a correlation between the genitive case and the subjunctive mood, and relates her overarching subject matter to other instances of differential object-marking.

“Kagan … takes on the goal of unifying the Intensional Genitive and the Genitive of Negation as one phenomenon. … This book will be of primary interest to Russianists, as it provides a well-supported analysis of a much-discussed linguistic puzzle in Russian … . will be of primary interest to those interested in non-canonical genitive use in Russian. … It is well researched, well-argued and makes an important contribution to the topic of genitive objects and to the field of Russian linguistics in general.” (Lauren Ressue, The Linguist List, January, 2013)
Buy options