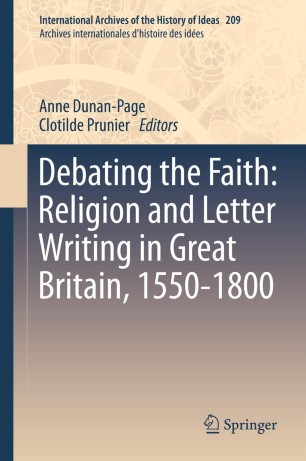 Debating the Faith: Religion and Letter Writing in Great Britain, 1550-1800

The first book to address the role of correspondence in the study of religion, Debating the Faith: Religion and Letter Writing in Great Britain, 1550-1800 shows how letters shaped religious debate in early-modern and Enlightenment Britain, and discusses the materiality of the letters as well as questions of form and genre. Particular attention is paid to the contexts in which letters were composed, sent, read, distributed, and then destroyed, copied or printed, in periods of religious tolerance or persecution. The opening section, ‘Protestant identities’, examines the importance of letters in the shaping of British protestantism from the underground correspondence of Protestant martyrs in the reign of Mary I to dissident letters after the Act of Toleration. ‘Representations of British Catholicism’, explores the way English, Irish and Scottish Catholics, whether in exile or at home, defined their faith, established epistolary networks, and addressed political and religious allegiances in the face of adversity. The last part, ‘Religion, science and philosophy’, focuses on the religious content of correspondence between natural scientists and philosophers.​