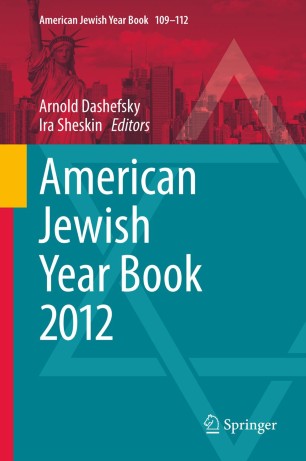 For many years, the American Jewish Yearbook has served as a resource for information on American Jews.  Leaders in the Federation movement, JCCs and many other organizations have turned to the Year Book for facts and figures about American Jewish Life. Having access to the Year Book on-line will make this resource available to thousands of leaders and individuals at a moment’s notice. This is quite clearly a much needed resource to our communities.
Samuel H. Asher, Chief Executive Officer, Jewish Community Federation of Richmond

For over a century, the venerable, authoritative and information-rich American Jewish Year Book has served as a critical resource to researchers, policy-makers and thought leaders in and around Jewish life in the United States. As a web-based publication, it will now reach the thousands of people and institutions who need reliable and comprehensive information on American Jews, presented in a clear and accessible fashion. In short, in the 20th century, the AJYB served as a vital resource for thinking and writing about American Jewry. In the 21st century, the online edition promises to continue to eminently fulfill that function and vastly extend its readership.
Steven M. Cohen, Berman Jewish Policy Archive @ NYU Wagner (www.BJPA.org )

This new improved version of the American Jewish Year Book continues in its century-long tradition of providing thought-provoking, insightful essays on the state of American Jewish life as well as invaluable information to researchers, policy-makers, and all those interested in the American Jewish community. Its accessibility is both widened and eased in this online version. Its editors deserve a long round of applause for revitalizing an essential resource about American Jewry.
Harriet Hartman, President, Association for the Social Scientific Study of Jewry (ASSJ), Professor of Sociology, Rowan University