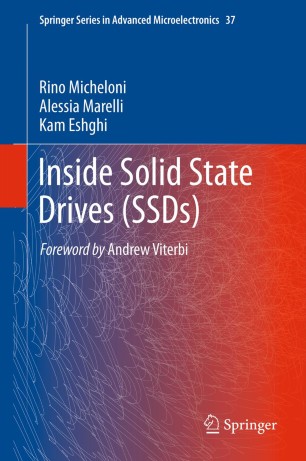 In client applications, small mobile platforms are leaving little room for batteries while demanding long life out of them. Therefore, reducing both idle and active power consumption has become critical. Additionally, client storage systems are in need of significant performance improvement as well as supporting small robust form factors. Ultimately, client systems are optimizing for best performance/power ratio as well as performance/cost ratio.

SSDs promise to address both enterprise and client storage requirements by drastically improving performance while at the same time reducing power.

Inside Solid State Drives walks the reader through all the main topics related to SSDs: from NAND Flash to memory controller (hardware and software), from I/O interfaces (PCIe/SAS/SATA) to reliability, from errror correction codes (BCH and LDPC) to encryption, from Flash signal processing to hybrid storage. We hope you enjoy this tour inside Solid State Drives.

Rino Micheloni (rino.micheloni@ieee.org) is Lead Flash Technologist at IDT (Integrated Device Technology). He has 18 years experience in NAND/NOR Flash memory design, architecture and algorithms as well as the related intellectual property. Before IDT, he was Senior Principal for Flash and Director of Qimonda's design center in Italy, developing 36 nm and 48 nm NAND memories. From 2001 to 2006 he managed the Napoli design center of STMicroelectronics focusing on the development of 90 nm and 60 nm MLC NAND Flash. Before that, he led the development of MLC NOR Flash. He is co-author of 103 U.S. patents and five Springer books on NOR/NAND/ECC/SSD. He is IEEE Senior Member and received the STMicroelectronics Exceptional Patent in 2003 and 2004, and the Qimonda IP Award in 2007.

Alessia Marelli was born in Bergamo, Italy in 1980. She received her degree in Mathematical Science from “Università degli Studi di Milano – Bicocca”, Italy in 2003 with a thesis about ECC applied to Flash Memories. In 2003 she joined STMicroelectronics, Agrate B., Italy. She was involved in digital design of Multilevel NAND Memories, especially redundancy, ECC and algorithms. In 2007, she joined Qimonda as senior digital designer. In 2009 she joined Integrated Device Technology (IDT) as senior digital designer, where she takes care of ECC applied to SSD. She is co-author of some patents regarding Redundancy and ECC applied to Flash Memories. She is co-author of Memories in Wireless Systems (Springer, 2008), Error Correction Codes for Non-Volatile Memories (Springer, 2008), Inside NAND Flash Memories (Springer, 2010).

Kam Eshghi is Sr. Director of Marketing in Enterprise Computing Division of IDT. Kam leads IDT’s business strategy, marketing and business development for flash controllers and PCIe switches. Kam drove the creation of IDT’s PCIe Enterprise Flash Controller product line and established IDT as a leader in this market.
Kam has more than 18 years of industry experience. Prior to joining IDT, Kam built product lines in server and networking markets at HP, Intel, Crosslayer Networks, and Synopsys.  During his time at Intel, Kam led a team to define strategy and product roadmaps for server chipsets.  Previous to that as Vice President of Marketing and Business Development at Crosslayer Networks, Kam defined a family of Ethernet-IP switch processors and led all customer engagements, ultimately leading to LSI’s acquisition.
Kam holds a M.S. in Electrical Engineering & Computer Science from Massachusetts Institute of Technology, and a Master’s in Business Administration and B.S. in Electrical Engineering & Computer Science both from University of California at Berkeley.

“This collection of chapters written by many different authors aims to enlighten the reader on all aspects of SSDs. … if you are interested in how SSDs really work, this may be the book you are looking for.” (Bernard Kuc, Computing Reviews, July, 2013)