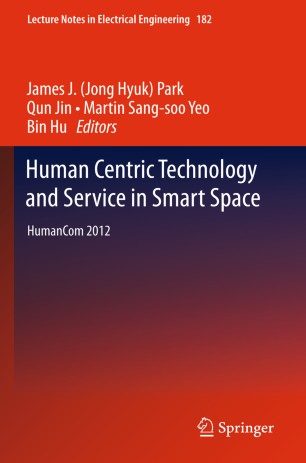 In addition, the conference will publish high quality papers which are closely related to the various theories and practical applications in human-centric computing. Furthermore, we expect that the conference and its publications will be a trigger for further related research and technology improvements in this important subject.

Jong Hyuk Park received his Ph.D. degree in Graduate School of Information Security from Korea University, Korea. From December, 2002 to July, 2007, Dr. Park had been a research scientist of R&D Institute, Hanwha S&C Co., Ltd., Korea. From September, 2007 to August, 2009, He had been a professor at the Department of Computer Science and Engineering, Kyungnam University, Korea. He is now a professor at the Department of Computer Science and Engineering, Seoul National University of Science and Technology (SeoulTech), Korea. Dr. Park has published about 100 research papers in international journals and conferences. He has been serving as chairs, program committee, or organizing committee chair for many international conferences and workshops. He is President of the Future Technology Research Association International (FTRA) and Korea Information Technology Convergence Society (KITCS). He is editor-in-chief of International Journal of Information Technology, Communications and Convergence (IJITCC), InderScience and Journal of Convergence (JoC),  FTRA Publishing. He is Associate Editor / Editor of 14 international journals including 8 journals indexed by SCI(E). In addition, he has been serving as a Guest Editor for international journals by some publishers: Springer, Elsevier, John Wiley, Oxford Univ. press, Hindawi, Emerald, Inderscience. His research interests include security and digital forensics, ubiquitous and pervasive computing, context awareness, multimedia services, etc. He got the best paper award in ISA-08 conference and the outstanding leadership awards from IEEE HPCC-09 and ICA3PP-10. Dr. Park's research interests include Digital Forensics, Security, Ubiquitous and Pervasive Computing, Context Awareness, Multimedia Service, etc. He is a member of the IEEE, IEEE Computer Society, KIPS, KICS, KIISC, KMMS, KDFS and KIIT.

Qun Jin received the B.S. Degree from Zhejiang University, China in 1982, the M.S. Degree from Hangzhou Institute of Electronic Engineering (now Hangzhou Dianzi University) and the Fifteenth Research Institute of Ministry of Electronic Industry, China in 1984, and the Ph.D. Degree from Nihon University, Japan in 1992. From April 1995 to March 1999, he worked as an associate professor at the Department of Information Science and Intelligent Systems, Faculty of Engineering, Tokushima University, Japan. From April 1999 to March 2003, he was an associate professor at School of Computer Science and Engineering, the University of Aizu, Japan. He is now Waseda University, Japan, where he holds a tenured full professor position at Networked Information Systems Lab, Department of Human Informatics and Cognitive Sciences, Faculty of Human Sciences. He has been engaged extensively in research works on Computer Science, Information Systems, and Internet Computing. He has published more than 100 refereed papers in Journals, Proceedings and Book Chapters. He has been serving as chairs, program committee, or organizing committee chair for many international conferences and workshops. He has co-edited the book Enabling Society with Information Technology (published by Springer-Verlag in November 2001). His recent research interests are mainly in networked information systems, collaborative Internet computing, human and social informatics, and cognitive science. He is a member of the ACM, IEEE, IEEE Computer Society, IEEE Systems, Man, and Cybernetics Society, IEEE Education Society, AAAI, AACE, Institute of Electronics, IEICE, IPSJ, JSSST, JSAI, JSISE, JSET, and JSKE.

Bin Hu is a Professor of the School of Information Science and Engineering, Lanzhou University, the leader of Intelligent Contextual Computing Group, Reader, at the Birmingham City University, United Kingdom; visiting professorship in ETH Switzerland and Beijing University of Posts and Telecommunications, China. His research fields are Pervasive Computing, CSCW and Semantic Web and has published more than 80 papers in peer reviewed journals, conferences, and book chapters. Now, his research focuses on human affect and cognition modeling based on bio-signals, which has been widely used in pervasive mental health care and affective learning. Particularly, he has obtained quite a few EU, UK and Chinese National projects in this subject as a Principle Investigator, e.g. FP7, HEFCE, etc. He has served more 30 international conferences as a chair/pc members and offered about 20 talks in high ranking conferences or universities in Europe/China, He has also served as editor/guest editor in more than 10 peer reviewed journals. He set up Web Society research lab and Chinese-European Ubiquitous Awareness and Intelligent Solutions institute based on Lanzhou University and Europe.