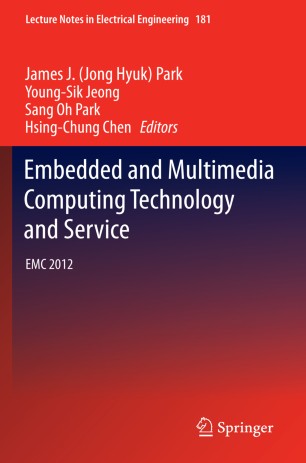 The 7th International Conference on Embedded and Multimedia Computing (EMC-12), will be held in Gwangju, Korea on September 6 - 8, 2012.

EMC-12 will be the most comprehensive conference focused on the various aspects of advances in Embedded and Multimedia (EM) Computing. EMC-12 will provide an opportunity for academic and industry professionals to discuss the latest issues and progress in the area of EM. In addition, the conference will publish high quality papers which are closely related to the various theories and practical applications in EM. Furthermore, we expect that the conference and its publications will be a trigger for further related research and technology improvements in this important subject.

Jong Hyuk Park received his Ph.D. degree in Graduate School of Information Security from Korea University, Korea. From December, 2002 to July, 2007, Dr. Park had been a research scientist of R&D Institute, Hanwha S&C Co., Ltd., Korea. From September, 2007 to August, 2009, He had been a professor at the Department of Computer Science and Engineering, Kyungnam University, Korea. He is now a professor at the Department of Computer Science and Engineering, Seoul National University of Science and Technology (SeoulTech), Korea. Dr. Park has published about 100 research papers in international journals and conferences. He has been serving as chairs, program committee, or organizing committee chair for many international conferences and workshops. He is President of the Future Technology Research Association International (FTRA) and Korea Information Technology Convergence Society (KITCS). He is editor-in-chief of International Journal of Information Technology, Communications and Convergence (IJITCC), InderScience and Journal of Convergence (JoC),  FTRA Publishing. He is Associate Editor / Editor of 14 international journals including 8 journals indexed by SCI(E). In addition, he has been serving as a Guest Editor for international journals by some publishers: Springer, Elsevier, John Wiley, Oxford Univ. press, Hindawi, Emerald, Inderscience. His research interests include security and digital forensics, ubiquitous and pervasive computing, context awareness, multimedia services, etc. He got the best paper award in ISA-08 conference and the outstanding leadership awards from IEEE HPCC-09 and ICA3PP-10. Dr. Park's research interests include Digital Forensics, Security, Ubiquitous and Pervasive Computing, Context Awareness, Multimedia Service, etc. He is a member of the IEEE, IEEE Computer Society, KIPS, KICS, KIISC, KMMS, KDFS and KIIT.

Young-Sik Jeong received the B.S. degree in mathematics and the M.S., and Ph.D. degree in computer science and engineering from Korea University, Seoul, Korea in 1987, 1989, 1993, respectively. Since 1993, he has been with the Department of Computer Engineering, Wonkwang University, Iksan, Korea, where he is a professor, working in the areas of Grid Computing and Semantic Grid, Distributed and Mobile Computing, LBS middleware and Ubiquitous Sensor Network middleware. He has authored or co-authored 9 books and has published about 40 refereed professional research papers. He has completed 20 MSCE and 2 PhD thesis students. Dr. Jeong has received a research awards, including MUE(Multimedia and Ubiquitous Engineering) 2008 research awards. He also received many funded research grants from MIC, KOSEF, KRF which are research group of Korea governments. He is also serving as an IEC/TC 100 Korean Technical Committee member, IEC/TC 108 Chairman of Korean Technical Committee and ISO/IEC JTC1 SC25 Korean Technical Committee member, The Editor for International Journal of Computer Communications, Elsevier. He has served as general-chair, publicity chair and workshop chair for a number of international conferences/workshops. Most recently he served as a steering committee of CUTE2010, workshop chair of FGCN 2008 and IEEE HPCC 2009, steering co-chair of The 2008 IEEE/IFIP International Conference on Embedded and Ubiquitous Computing, EUC 2008 and so on. Home page: http://grid.wku.ac.kr

Hsing-Chung Chen received the B.S. degree in Electronic Engineering from National Taiwan University of Science and Technology, Taipei, Taiwan, in 1994, and the M.S. degree in Industrial Education from National Normal University, Taipei, Taiwan, in 1996, respectively. He received the Ph.D. degree in Electronic Engineering from National Chung Cheng University, Chia-Yi, Taiwan, in 2007. During the years 1991-2007, he had served as a System Engineer at the Department of Mobile Business Group, Chunghwa Telecom Co., Ltd. From February 2008–present, he has been the Assistant Professor of the Department of Computer Science and Information Engineering at Asia University, in Taichung County of Taiwan. Currently, he is interested in researching Multi-session Cryptography, Role-based Access Control, Fuzzy Control, Grey Theoretic, and Wireless Communications. He is a member of the Chinese Cryptology and Information Security Association (CCISA). He is also a member of the International Fuzzy System Association (IFSA), the member of the Chinese Grey Systems Association. He joins the international committee on International Conference on Convergence and Hybrid Information Technology (ICCIT) series. Dr. Chen is also the members of IEEE and IET.