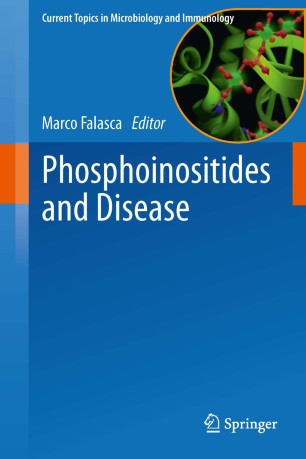 Phosphoinositides (PIs) are minor components of cellular membranes that play critical regulatory roles in several intracellular functions. This book describes the main enzymes regulating the turnover of each of the seven PIs in mammalian cells, some of their intracellular functions and some evidence of their involvement in human diseases. Due to the complex inter-relation between the distinct PIs and the plethora of functions that they can regulate inside a cell, this book is not meant to be a comprehensive coverage of all aspects of PIs signalling but rather an overview on the current state of the field  and where it could go from here.

Phosphoinositide and inositol phosphates interact with and modulate the recruitment and activation of key regulatory proteins and in doing so control diverse functions including cell growth and proliferation, apoptosis, cytoskeletal dynamics, insulin action, vesicle trafficking and nuclear function. Initially, inositide signaling was limited to the PLC pathway; however, it is now clear that all the seven phosphoinositides and more than 30 different inositol phosphates likely have specific signaling functions. Moreover there is a growing list of proteins that are regulated by inositol signaling. This has raised the question as to how inositol signaling can control diverse processes and yet maintain signaling specificity. Controlling the levels of inositol signaling molecules and their subcellular compartmentalisation is likely to be critical. This meeting will bring together scientists from different backgrounds to discuss how understanding inositol signaling may be used to target complex human diseases that manifest themselves when inositol signaling is deregulated.