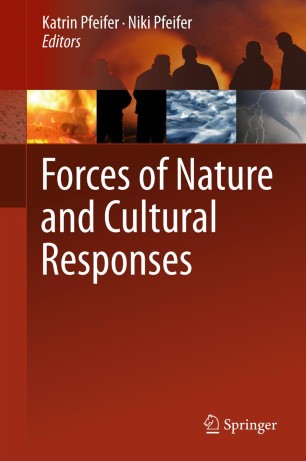 Forces of Nature and Cultural Responses

How do and how did people perceive, manage and respond to natural disasters? How are the causes of natural disasters explained in history, how are they explained today? This volume investigates relationships between forces of nature and human culture in a multidisciplinary context bridging science and the humanities.

Forces of nature and cultural responses is divided into four sections: (1) ball lightning, (2) earthquakes and tsunamis, (3) volcanic eruptions and plagues, and (4) hurricanes and floodings. Specifically, Section 1 investigates theories and case studies of ball lightning phenomena. Section 2 includes a psychological study on the impact of earthquakes on academic performance, a study on tsunami vulnerability and recovery strategies in Thailand and a study on the social and economic aftermaths of a tsunami and a hurricane in Hawaii. Section 3 consists of a chapter on volcanic eruptions and plagues as well as cultural responses in Ancient Times and a study on contemporary vulnerability and resilience under chronic volcanic eruptions. Section 4 investigates the impact of hurricane Katrina on the current jazz scene in New Orleans and cultural responses to floodings in The Netherlands in  Early Modern Times.

Katrin Pfeifer (née Hauer) studied history, pedagogy, and English at the Universities of Salzburg and Vienna. She was awarded with a DOC-Grant by the Austrian Academy of Sciences. Her research interests lie within European environmental and cultural history from Early Modern Times up to today. In the not too distant past, Katrin Pfeifer has worked on youth cultures and on how to enhance learning effects by the use of pictures in education.

Niki Pfeifer studied psychology and philosophy at the University of Salzburg and at York University (UK). He is supported by the Alexander von Humboldt-Foundation. Niki Pfeifer’s research topics are located in the intersections of formal epistemology, probability logic, and the psychology of reasoning. Moreover, his research interests include historical severe storms and the cultural history of natural disasters in general.