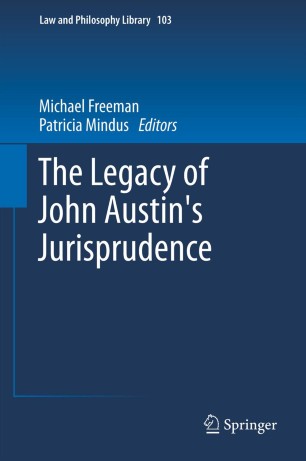 The Legacy of John Austin's Jurisprudence

This is the first ever collected volume on John Austin, whose role in the founding of analytical jurisprudence is unquestionable. After 150 years, time has come to assess his legacy. The book fills a void in existing literature, by letting top scholars with diverse outlooks flesh out and discuss Austin’s legacy today. A nuanced, vibrant, and richly diverse picture of both his legal and ethical theories emerges, making a case for a renewal of interest in his work. The book applies multiple perspectives, reflecting Austin’s various interests – stretching from moral theory to theory of law and state, from roman law to constitutional law – and it offers a comparative outlook on Austin and his legacy on the backdrop of the contemporary debate and major movements within legal theory. It sheds new light on some central issues of practical reasoning: the relation between law and morals, the nature of legal systems, the function of effectiveness, the value-free character of legal theory, the connection between normative and factual inquiries in the law, the role of power, the character of obedience and the notion of duty.​

Austin and Roman Law Austin's Divine Command Theory of Moral and Legal Obligation Austin, Kelsen and the Model of Sovereignty Bentham and Austin John Austin and Constructing Theories of Law Mill and Austin