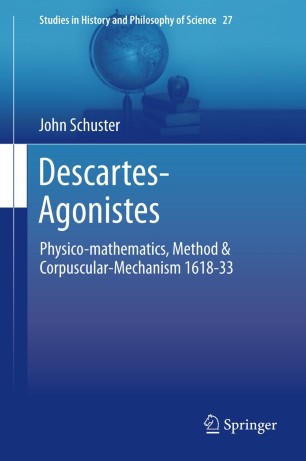 Part of the Studies in History and Philosophy of Science book series (AUST, volume 27)

This book reconstructs key aspects of the early career of Descartes from 1618 to 1633; that is, up through the point of his composing his first system of natural philosophy, Le Monde, in 1629-33. It focuses upon the overlapping and intertwined development of Descartes’ projects in physico-mathematics, analytical mathematics, universal method, and, finally, systematic corpuscular-mechanical natural philosophy. The concern is not simply with the conceptual and technical aspects of these projects; but, with Descartes’ agendas within them and his construction and presentation of his intellectual identity in relation to them.

Descartes’ technical projects, agendas and senses of identity shifted over time, entangled and displayed great successes and deep failures, as he morphed from a mathematically competent, Jesuit trained graduate in neo-Scholastic Aristotelianism to aspiring prophet of a systematised corpuscular-mechanism, passing through stages of being a committed physico-mathematicus, advocate of a putative ‘universal mathematics’, and projector of a grand methodological dream. In all three dimensions—projects, agendas and identity concerns—the young Descartes struggled and contended, with himself and with real or virtual peers and competitors, hence the title ‘Descartes-Agonistes’.

“This is a massive book, overflowing with information ... this is a remarkably rich book, synthesizing much scholarship on Descartes' scientific work while contributing bold and novel interpretations of this work and its relation to Descartes' self-conception.” (Andrew Arana, Mathematical Reviews, September, 2017)

“In Descartes-Agonistes: Physico-mathematics, Method, and Corpuscular-Mechanism, 1618–33, John Schuster propounds an exact genesis for Descartes’s scientific work. … Schuster also offers plenty of details and information on the genesis of Descartes’s law of refraction and describes it in its historical context. … I would strongly recommend … . offer much food for thought and, once again, testify to the richness of Descartes’s works and thought.” (Michel Blay, Isis, Vol. 107 (1), March, 2016)

“The book is a grand success: it is meticulously argued, elaborated at great depth, and provides the most developed reconstruction of Descartes’ natural philosophy thus far. … Descartes-agonistes is essential reading for Descartes historians of science and metaphysics alike.” (Emily Thomas, Annals of Science, Vol. 73 (1), 2016)

“This book helps us to deepen and change our view of Descartes’ trajectory and, in sum, to better understand the significance of Descartes’ work in the seventeenth century. At the same time, Schuster provides historians with a different and fascinating approach to the trajectory of ideas and aims of this author belonging to the Scientific Revolution.” (Maria Rosa Massa Esteve, zbMATH, Vol. 1279, 2014)