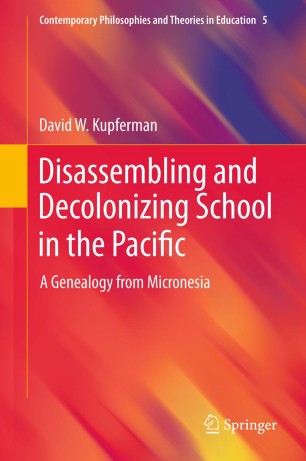 Disassembling and Decolonizing School in the Pacific

A Genealogy from Micronesia

Part of the Contemporary Philosophies and Theories in Education book series (COPT, volume 5)

Schooling in the region known as Micronesia is today a normalized, ubiquitous, and largely unexamined habit. As a result, many of its effects have also gone unnoticed and unchallenged. By interrogating the processes of normalization and governmentality that circulate and operate through schooling in the region through the deployment of Foucaultian conceptions of power, knowledge, and subjectivity, this work destabilizes conventional notions of schooling’s neutrality, self-evident benefit, and its role as the key to contemporary notions of so-called political, economic, and social development.

This work aims to disquiet the idea that school today is both rooted in some distant past and a force for decolonization and the postcolonial moment. Instead, through a genealogy of schooling, the author argues that school as it is currently practiced in the region is the product of the present, emerging from the mid-1960s shift in US policy in the islands, the very moment when the US was trying to simultaneously prepare the islands for putative self-determination while producing ever-increasing colonial relations through the practice of schooling.

The work goes on to conduct a genealogy of the various subjectivities produced through this present schooling practice, notably the student, the teacher, and the child/parent/family. It concludes by offering a counter-discourse to the normalized narrative of schooling, and suggests that what is displaced and foreclosed on by that narrative in fact holds a possible key to meaningful decolonization and self-determination.