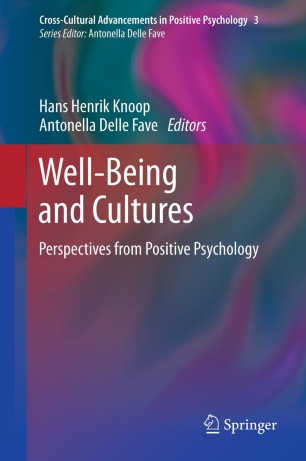 This anthology focuses on empirical studies comparing cultures in relation to central positive psychological topics. It contains selected papers from the 5th European Conference on Positive Psychology held in 2010 in Denmark. The book starts out with an introductory chapter that brings together the main ideas and findings within an integrative perspective, based on a broad theoretical framework encompassing interdisciplinary and methodological issues. It gives special emphasis to some open issues in the theory and assessment of culture-related dimensions, and to the potential of positive psychology in addressing them. The introductory chapter is followed by two chapters that examine theoretical approaches and instruments developed to assess happiness and well-being across cultures. Following that examination, five chapters are devoted to the relationship between well-being, cultures and values. The second half of the book prominently investigates well-being across cultures in the light of socio-economic factors.

This book shows that positive psychology, now officially well into its second decade, is providing still finer-grained perspectives on the diversity of cultures along with insights about our shared human nature, uniting us for better or worse.

Hans Henrik Knoop is Associate Professor of educational psychology and Director of the Positive Psychology Research Unit at the Danish School of Education, University of Aarhus, Denmark. His work is focused on learning and creativity in education and professional work, currently collaborating with more than 12.000 pupils and 2.000 teachers.

For more than a decade Hans Henrik Knoop has been involved in research cooperation with colleagues at Harvard University, Stanford University and at Claremont Graduate University in the GoodWork® Project and as researcher he has participated in development projects for LEGO (1998-2004), Danfoss Universe (2005-2010), SIS Akademi (2004-2008) and Royal Greenland Academy (2006), among others. In 2006-2007 contributed to the Danish DR2’s programs on talent development in schools, and he was the scholarly anchor of the Danish TV2’s reality documentary series “Plan B” (2006-2007) and “SKOLEN – verdensklasse på 100 dage” [The school – world class in 100 days] (2008) concerning efficient education. “Plan B” received international attention in being nominated for the prestigious television award Golden Rose of Montreux in 2007. From 2007-2010 he was Research Director at the Universe Research Lab in Denmark.

Dr. Delle Fave is author of numerous research publications, many of them on optimal living and positive health. Recently she helped create a new psychological measure, The Eudaimonic Happiness Inventory.