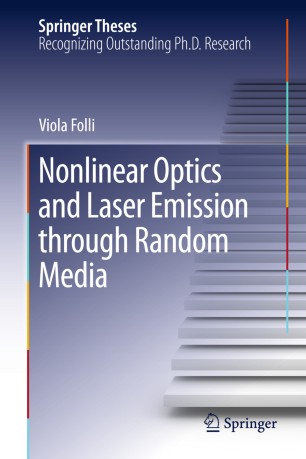 Disorder is everywhere, inherently present in nature, and is commonly believed to be a synonymous with disturbance. As a consequence, the methodical and customary study of the dynamics of the electromagnetic field, both in the linear and nonlinear optical regimes, leans to rule out it from the treatment.
On the other hand, nonlinearity enriches the physical disciplines and brings them closer to reality with respect to the linear approximation. Nonlinearity allows to stimulate a wide and rich ensemble of optical responses that beautifies the role of matter in the active processes with electromagnetic fields.
Independently of each other, both of these mechanisms foster localization of light. What happens when light enlightens their synergistic interaction?
When pushed together, light, disorder and nonlinearity make new and intriguing phenomena emerge. This text provides a comprehensive investigation of the role of disorder in the nonlinear optical propagation both in transparent media and lasers.  Eventually, disorder promotes and enhances complex nonlinear dynamics opening new perspectives in applied research driven by the processes of localization of the electromagnetic field. The first experimental study of laser emission in granular media unveils how randomness magnifies and largely affect laser-matter interactions.
Viola Folli in her research work touches and deepens the leading milestones of the new science named Complex Photonics.