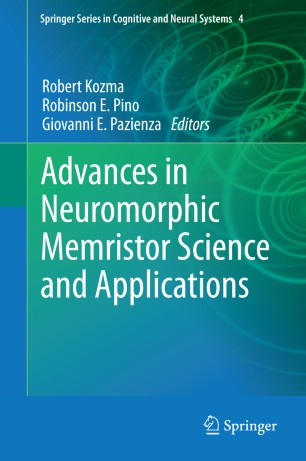 Posited by Professor Leon Chua at UC Berkeley more than 40 years ago, memristors, a nonlinear element in electrical circuitry, are set to revolutionize computing technology. Finally discovered by scientists at Hewlett-Packard in 2008, memristors  generate huge interest because they can facilitate nanoscale, real-time computer learning, as well as due to their potential of serving as instant memories. . This edited volume bottles some of the excitement about memristors, providing a state-of-the-art overview of neuromorphic memristor theory, as well as its technological and practical aspects.

Based on work presented to specialist memristor seminars organized by the editors, the volume takes readers from a general introduction the fundamental concepts involved, to specialized analysis of computational modeling, hardware, and applications. The latter include the ground-breaking potential of memristors in facilitating hybrid wetware-hardware technologies for in-vitro experiments. The book evinces, and devotes space to the discussion of, the socially transformative potential of memristors, which could be as pervasive as was the invention of the silicon chip: machines that learn in the style of brains, are a computational Holy Grail.

With contributions from key players in a fast-moving field, this edited volume is the first to cover memristors in the depth needed to trigger the further advances that surely lie around the corner.